All about Mem – too much information?

I come from a long line of preachers and teachers on my mother’s side of the family; and atheists, teachers and journalists on the other side. It would have been surprising had I not become a university graduate, let alone a speaker and writer. My maternal grandmother graduated from Sydney University in 1908 at a time when it was extremely rare for women to have had the opportunity to do so. My mother followed in her footsteps by graduating from the same university in 1935. My grandmother Pearl, and mother Nan, on their graduation days.

I was born in Melbourne, Australia, in 1946, but left at the age of six months to go to Africa with my parents. Me with my mum, Nancy, and my dad, Wilfrid Gordon McDonald Partridge

My parents were missionaries. My father was the director of the teaching training school on Hope Fountain mission, about 15kms outside the city of Bulawayo, in Zimbabwe, which used to be called Rhodesia. I lived on the mission from 1946-1965, when I went to drama school in London. And what a contrasting world that was! 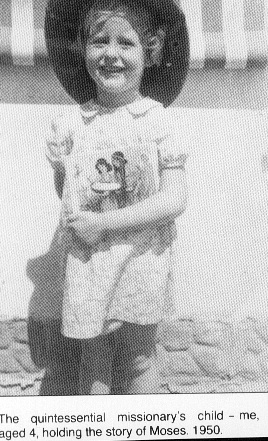 In my first year at the mission school I was the only white child so all my close friends were Africans. We learned to write by drawing our letters in the red earth with our fingers. Later, we graduated to writing squeakily on slates. Now, of course, I write on a computer, an i-Pad and a smart phone, but I still use a pencil and paper whenever I have a writing problem to solve. My brain loves it when I write in pencil.

When the authorities found out that I was at a black school they told my parents it was against the law for me to be there, so I was taken away and sent to a white school, where I was extremely miserable and friendless for over a year. I spoke English with an Africa accent and was teased so much I used sit in the toilets and sob. At the age of six! I was at white schools from that time onwards.

My father’s name—Wilfrid Gordon McDonald Partridge—is also the title of my second book. Miss Nancy, in the same book, is my mother; the rest of Miss Nancy’s name comes from the names of my two sisters, both of whom are younger than I am: Jan Delacourt (who used to be Jan Delacourt Cooper) and Alison Partridge. Jan lives in Italy and Alison lives north of Sydney. Sadly, Alison became a paraplegic in her early twenties. Here are some photos of us at various times of our lives. I am the blonde and then I am the red-head…. My mother encouraged me early in my high school years to take up public speaking, for which I’m very thankful. I’ve had to make hundreds of speeches in my life, and so many in Australia that I think by now I must have spoken to everyone, all 22 million, face to face. I won a public speaking competition in Bulawayo when I was 16. I was more naturally blonde then. 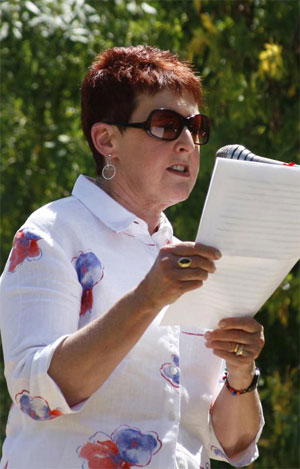 Here I am almost 50 years later speaking at a protest rally in my hometown. And yet another speech, for teachers in Toronto

I think I was acting and putting on a show from the time I could walk. I did a lot of acting in my school years.  This is me, second row, big hat, long black hair, being Le Bourgeois Gentilhomme in Moliere’s play of the same name, in my last year at high school, 1964. It was in English, not French, I hasten to add. I often played men as I have always had a deep voice and it was an all-girls school, so someone had to be the man. It was an all white school, also, as you see.  I lived in a racist country. In the mid-sixties, totally unsophisticated, I went to drama school in London and spent three happy years changing my Rhodesian accent, speaking Shakespeare, singing Beatles’ songs, wearing miniskirts, and dyeing my hair—a habit I haven’t grown out of. I was brilliant red for years, but blonde now looks better in my aging state. Being a red-head had become my brand, my recognizable logo, so people who see my now are shocked and saddened.

At drama school I met Malcolm Fox, the love of my life. In 1969 I married him. He was a highly gifted teacher of French and drama, who is now a gorgeous retired drama lecturer. Malcolm and I have been married for 44 years (as of 02:01:2013) In my final year at drama school, 1968, Malcolm was a volunteer in Tunisia. He then became a volunteer in Rwanda and I joined him there, to teach English, in 1969, a few weeks after we were married.  We returned to England that year and made plans to migrate to Australia. My beloved grandfather, Wilfrid Partridge, was 90 and lived in Adelaide, South Australia, so that’s where we decided to settle. We arrived in January 1970, planning to stay two years. We are still here. Our daughter, Chloë, to whom Possum Magic is dedicated, was born in 1971. Chloe was a journalist for seven years, first in Adelaide and then in Paris; then she became a high school teacher of French and English at Loreto, a Catholic girls’ school in Adelaide; and now she’s a fulltime politician: a Labor Party Member of Parliament for the state seat of Bright in South Australia, which she won in the March 2006 elections. I have to pass this sign whenever I go to our shopping centre. Is it really my Chloë? Yes, it is! Until the next Sate election, in March 2014, when who knows what will happen, Chloë is the Minister for Transport Services and the Minister Assisting the Minister for the Arts. And of course she is also, and more importantly, the mother of our adored grandson, Theo. Because of the craziness of the Internet this will be only photo of Theo on this website, when he was making the acquaintance of a wallaby for the first time, aged two, in 2012.

Back to me—after all, this is all about me!—as a mature age university student in my early thirties, I studied children’s literature at Flinders University. This set me, totally unawares, on the road to some fame and even fortune since it was during that course that I wrote the first draft of my first book: Possum Magic, as an assignment. It was rejected nine times over five years but went on to become (and continues to be, to this day) the best-selling children’s book in Australia, with nearly 5 million copies sold. In 2004 its 21st birthday was celebrated with parties and events in thousands of schools and other places around Australia, and a new re-designed edition was launched. The colours of the original film of the illustrations were fading because it had been reprinted so many times. They now look gorgeous again. This is a photo of me (left) and Julie Vivas, the illustrator, at the launch of Possum Magic at the Sydney Opera House in May 1983. All I can say is thank God for the art of dentistry. And the wombat and koala are real!

Since Possum Magic I have written many more books for children: over 40, I believe, at the last count. I have also written five non-fiction books for adults. The title of my autobiography, in the USA edition, is ‘Dear Mem Fox, I have read all your books even the pathetic ones’ which was a quote from a child’s letter. Around half my picture books have become bestsellers, which just goes to show that occasionally I write good books as well as pathetic ones. A few of my books have different titles and different illustrators in the USA but essentially they are the same inside.

One of the best moves I ever made was to re-train, in 1981, out of drama into literacy studies, to find out how children best learn to read and write. Literacy has become the great focus of my life—it’s my passion, my battle, my mission and my exhaustion. If you’re the parent of a child aged from 0-7 I hope you will enjoy my bestselling book for parents: Reading Magic: how your child can learn to read before school and other read aloud miracles. If you are a teacher I hope you will be challenged but also thrilled by my book Radical Reflections, about the teaching of reading and writing, now available only in its USA edition.

Writing is my second love. My first is teaching, to which I admit an addiction so powerful that I’m surprised I had the courage to retire early (in 1996, aged 50) from my position as Associate Professor, Literacy Studies, in the School of Education at Flinders University, South Australia. I taught there with great satisfaction and happiness, full time, for 24 years. I cried three times in my last class, so sad was I to leave.

I now spend most of my time writing presentations urging parents, teachers, and others to read aloud to children aged between 0-5, and I travel the world doing it. I have travelled a great deal as an international literacy consultant to places as diverse as Bahrain, East Timor, Guam, Hong Kong, Oman, Tanzania, China, and of course to the USA, which I have visited over 110 times. I have spoken at hundreds and hundreds of conventions in the States. I also travel—i.e. work like an exhausted mongrel!—extensively around Australia, which I particularly adore since this is my beloved homeland. And I continue to write picture books when the spirit moves me, so if you’re still reading this, and if you like my books, and keep buying them, I promise to continue to write picture books for children even though it’s the hardest job in the world and much more of a grind that most people realize. I have many new books in the pipeline, currently being illustrated. They will appear over the next five years.

I’ve received a number of awards over the years, and am extremely grateful for each of them:

As you see, I have not mentioned any of the sadness in my life. Of course there have been many hideous fears, sorrows, horrors and griefs: for example, all three of us sisters are cancer survivors. Dreadful things happen to almost all of us during our lifetimes and for much of our lives we think dreadful things are happening only to us. But as we grow older we look around in amazement to find everyone else sitting with us, in the same boat.  Nevertheless, to focus on my ‘dreadful things’ would be to go back in time and re-live them, and what crazy person would want to do that? The future is what matters, lived with a resilient heart and a smiling face.