This is the USA title of my autobiography, which is still in print in the USA.

In Australia it was called…Mem’s The Word but this edition is out of print. 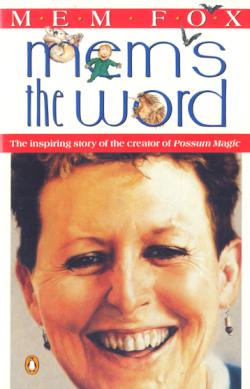 The USA edition has a slightly different first chapter as well as American terms and spelling, but essentially it’s the same book.

When I understood the kind of phenomenon Possum Magic had become I felt I’d have to write my autobiography sooner or later.  I also thought, in 1990, that I was at the height of my fame, which proved wrong, as it turned out. In any case, the task hung over me like the black cloud of a university assignment so I got on with the job. I’d had an interesting life, growing up in Africa; working in Switzerland as a maid in between home and college; going to drama school in London in the swinging sixties; meeting the love of my life; teaching in Rwanda; moving back to Australia; having a baby and loving a daughter; having cancer; writing the best selling book of its kind; and learning to love America. I wrote it all down and then cut most of it and rearranged it in such a way that it reads like a true-story novel—I’d wanted to write a novel and grabbed this as a second-best opportunity. So it does read intentionally like a rollicking story. I even copied Charles Dickens’ technique of finishing each chapter in such a way that readers had to read the next chapter to know what happened. Cheeky.

I know it was been the much-loved choice of many reading clubs when it first came out (if my correspondence is anything to go by) since it is, I guess, a book for women. I hear of women reading it in bed and saying: ‘Listen to this,’ so often their partners have been driven to reading it themselves. According to the stream of long, self-revelatory letters I still receive about it, it seems to make women howl with laughter and weep with recognition. That makes me happy.

Don’t look for a sequel. Enough is enough. Any other news is on this website in the archives somewhere…