Judy took this photo of me on the book tour in Nov. 2012. Another interview on the run!

Goodnight, Sleep Tight was first published in 1988. It had seven nursery rhymes woven into its structure because I’d heard at a literacy conference in South Africa in the early 90s that children who know six nursery rhymes by heart by the time they’re four are usually in the top reading group by the age of eight. I wanted to make that goal a reality for as many children as possible. I thought seven rhymes was even safer than six!

But for one reason and another the book was badly produced by a publisher who has since gone out of business. 10,000 copies of the original were pulped, which I found to be a truly horrifying waste, but I wasn’t consulted; nor was I even asked if I’d like to buy any of those copies. And the book was out of print for twenty years. But look! There’s a brand new edition! Here’s how it came about… This book is one of my favourite read-alouds.

In late 2010 I was asked to participate in a literary event at the Wheeler Centre in Melbourne. The convener, Michael Williams, had grown up with the rhymes and repetitions of Goodnight, Sleep Tight. His mother had read it to him endlessly. He told me he no longer had a copy but he now had a baby son of his own and was keen to find a copy of the book. Did I have one he could buy? I said I was sorry but I didn’t. I had only two copies left: one for me, and one for my grandson.

He was so desperate he asked if I could at least type out the text for him. I said I’d be happy to. I’m a slow typist so as I was typing it out I was able to stand back, as it were, and see it afresh. I loved it! Hah! What a great text! What if I sent it to my agent again, after all these years in the wilderness?

The long and the short of it is that I re-wrote it slightly (there are now two children, not one) and the magical Judy Horacek agreed to illustrate it very much in the manner of Where Is The Green Sheep? making Goodnight, Sleep Tight into a companion book for that best seller. One of the final illustrations looks as if it’s leapt from the pages of Green Sheep into the new book, thereby making a lovely surprise connection between the two.

Scholastic has been enormously happy to publish Goodnight, Sleep Tight, for which a certain Michael Williams and I will be eternally grateful! I hope, like Rumpelstiltskin in the fairy tale, I have been able to weave straw into gold with Judy’s genius helping me along. I’ll leave you to be the judge of that!

Needless to say the book is dedicated to Michael Williams, without whom, etc., etc.!

Reading this book to a group of children is wild fun. The rowdy interaction gets an audience awake in the same way as The Magic Hat and Hattie and Fox. 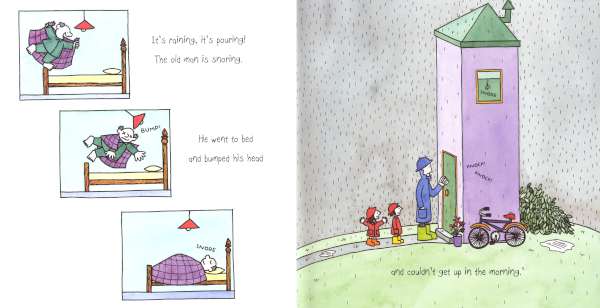 I rarely provide teaching ideas for my books because I strongly believe that the reading of a book, over and over again, does its own invaluable teaching. We can waste so much time on silly, peripheral activities that children forget the original book, its original appeal and joy, and its purpose—to entertain!—in the welter of stupidity that follows it. However…

I did go to my local primary school this year (2013) armed with 30 individual nursery rhymes thrown into a hat. I was working with Year Twos, aged 6-7. We read Goodnight, Sleep Tight a couple of times interactively. Then each child picked a nursery rhyme out of the hat and read it to the class, with my help if necessary. In between each reading-of-a-rhyme, to provide encouragement for the reader, we all said the chorus from Goodnight, Sleep Tight:

The children had a week to learn their rhyme off by heart. Some nursery rhymes have complex vocabulary and grammar so it wasn’t easy for every child to memorize his or her rhyme, but they did their best. I arrived, we rehearsed, and then the Year Ones came in and we performed the rhymes for them. I divided the two sets of groups into two, so that half the Year Ones listened to about 15 rhymes, and other half listened to the other 15 rhymes. I wish I had had more time to rehearse, so every child could have reached the perfection I was aiming for, but within the time constraints they did amazingly well.

I chose to do this so I could have fun again in the classroom. I sometimes miss teaching so much I ache. The benefit to the children was the noisy, active, hilarious engagement with a kind of language which, when learnt by heart, instills a great sense of the rhythms of the written word and promotes the strategy of prediction (through the rhymes) which we all use when we read. Language learnt by heart is language remembered. It gave the children a chance to perform, to speak up clearly, and to feel very proud of themselves. Children need to understand rhyme and rhythm before they can learn to read so I knew it would be helpful to the Year Ones. To finish each performance I read Goodnight, Sleep Tight, to bring us back to the book in a grand interactive read aloud. A lively time was had by all.

35 nursery rhymes appear below, in case you’d like to do this yourself.

Doctor Foster went to Gloucester
All in a shower of rain.
He stepped in a puddle
Right up to his middle,
And never went there again.

Ladybird! Ladybird!
Fly away home.
Your house is on fire.
And your children all gone.
All except one,
And that’s little Ann,
For she has crept under
The frying pan.

Hark! Hark! The dogs do bark,
The beggars are coming to town.
Some in rags,
And some in tags,
And one in a velvet gown!

One, two, three, four, five –
Once I caught a fish alive.
Six, seven, eight, nine, ten –
Then I let it go again.
Why did I let it go?
Because it bit my finger so.
Which finger did it bite?
The little finger on the right.

If all the world were paper,
And all the sea were ink,
If all the trees
Were bread and cheese,
What would we have to drink?

Hey, diddle, diddle,
The cat and the fiddle,
The cow jumped over the moon.
The little dog laughed
To see such sport,
And the dish ran away with the spoon.

Goosey, goosey, gander,
Whither shall I wander?
Upstairs, and downstairs,
And in my lady’s chamber.
There I met an old man
Who wouldn’t say his prayers!
I took him by the left leg
And threw him down the stairs.

I had a little nut tree, nothing would it bear
But a silver nutmeg and a golden pear.
The King of Spain’s daughter came to visit me,
And all for the sake of my little nut tree.
I skipped over water, I danced over sea,
And all the birds in the air couldn’t catch me.

Jack Sprat could eat no fat,
His wife could eat no lean,
And so betwixt them both
They licked the platter clean!

Little Bo Peep has lost her sheep
And doesn’t know where to find them.
Leave them alone,
And they’ll come home,
Wagging their tails behind them.

Little Boy Blue, come blow on your horn
The sheep’s in the meadow, the cow’s in the corn.
Where is the boy who looks after the sheep?
He’s under a haystack, fast asleep.
Will you wake him? No, not I,
For if I do, he’s sure to cry

Mary had a little lamb, its fleece was white as snow.
And everywhere that Mary went the lamb was sure to go.
It followed her to school one day which was against the rules.
It made the children laugh and play, to see a lamb at school.

Little Jack Horner
Sat in a corner,
Eating a Christmas pie.
He stuck in his thumb
And pulled out a plum,
And said, “What a good boy am I!”

Wee Willie Winkie Runs through the town,
Upstairs and downstairs In his nightgown.
Rapping at the windows,
Crying through the lock,
“Are the children in their beds? For it’s now eight o’clock.”

Little Miss Muffet, sat on a tuffet,
Eating her curds and whey;
Along came a spider,
Who sat down beside her
And frightened Miss Muffet away.

Yankee Doodle came to town,
A-ridin’ on a pony;
He stuck a feather in his hat
And called it macaroni.

There was an old woman who lived in a shoe.
She had so many children,
She didn’t know what to do.
She gave them some broth,
Without any bread,
And whipped them all soundly,
And sent them to bed.

Peter, Peter, pumpkin eater,
Had a wife and couldn’t keep her.
He put her in a pumpkin shell
And there he kept her, very well.

Tom, Tom, the piper’s son,
Stole a pig, and away did run!
The pig was eat,
And Tom was beat,
And Tom went crying
Down the street.