Sail Away The Ballad of Skip and Nell 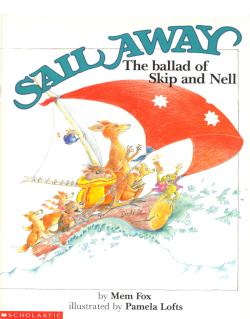 In 1983 Australia won The America’s Cup, a famous sailing race, for the first time in 132 years. The entire country went wild. The Prime Minister told everyone to take a day off, or something like that! I often think the national pride that swept across the country that day had a great impact on the sales of Possum Magic. It had been published only a few months earlier. The population went crazy about anything overtly, nationalistically Australian, and Possum Magic was nothing if not Australian.

But I recalled the proverb: ‘pride comes before a fall’ and wondered what would happen if we lost the America’s Cup next time around. (We did lose it.) To this end, I wrote a ballad about two dingo pups going to the race and winning it by accident so neither the Americans nor the Australians could win. I wrote it in ballad form because there are so many well-known ballads in Australia’s short literary history such as The Man from Snowy River, and Mulga Bill’s Bicycle. Many Australians themselves will not know that our national anthem: Advance Australia Fair, is in ballad form, which means, hilariously, that Sail Away can be sung to the same tune.

’Twas in the Northern Territory
Two dingo pups did dwell.
The cattlemen, their neighbours,
Called ’em Skip and Little Nell.

One night, beside a low campfire,
They heard the men talk loud
About a boat-race way out west
That’d make all Aussies proud.

One said he’d give his two eye teeth
To be there at the race.
‘My oath, too right!’ the other said,
With longing on his face…