The story behind the story of Bonnie and Ben Rhyme Again 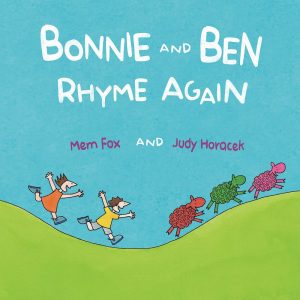 I know. A new book at long last!

I love this book. I love the illustrations by Judy Horacek, which goes without saying, but I’m shouting it from the rooftops anyway. And regarding the text, I love in particular the repetition of the phrase: ‘without hesitation’. Pardon my appalling pride, but what a super phrase for a young child’s book—so unexpected, so apparently ’difficult’ and inappropriate for small children. Not anymore. It will trip off their tongues in kindergarten and stay with them forever. I adore lifting children’s vocabulary to giddy new heights.

In spite of my being so happy—finally —with Bonne and Ben Rhyme Again, there’s quite a story behind the story of this book, not the least of which is that I wrote a hideous few drafts and thought the final draft was good enough. It wasn’t…

Sadly, dear readers, in spite of all my knowledge and experience, I almost failed miserably with this new book. I blush to admit it. I was cavalier, satisfied too quickly, and dismissive of the work required.

Judy Horacek and I were on tour with our publicist Sarah Hatton, for Goodnight, Sleep Tight! on a long drive between two events. Sarah suggested, almost as a joke, that we start writing a sequel as we drove along. She pointed out that there were dozens of nursery rhymes we hadn’t used in Goodnight, Sleep Tight. She also pointed out that I’m always ranting on about the purpose and importance of nursery rhymes in helping children to learn to read early and with ease. It’s hard for the children who don’t know any. So, said Sarah, why not write another, similar book with the same characters and another six or seven different nursery rhymes? (You may have noticed that Bonnie and Ben Rhyme Again is dedicated to Sarah Hatton, who started it all. Thank you so much, Sarah!)

We made a list and recited the rhymes together, to pass the time. The whole thing was a giggle. I didn’t really take it seriously. I knew that a series of books—companion books, rather than sequels—sells well, so I should have been more conscientious. But my mind wasn’t fully on the job.

Anyway, we chose the rhymes, and over the next few months I wrote several drafts that could have passed as a perfectly adequate. But can ‘adequate’ really be good enough? Judy did some superb illustrations, which made me feel guilty, but I was so busy—this was in 2017, one of my busiest years on record, that I didn’t care. I was tired and madly otherwise occupied.

One weekend, when I thought I had finally nailed it, I read the text to my husband, expecting to receive the usual warmth and praise at the end of it. Instead, he was shocked. He said there was nothing of the usual Mem Fox magic in it, not a single exciting word to set kids alight. I was murderous with rage—maddened. I knew he was right. I had known all along that it wasn’t good enough but had been too hot and bothered to admit it.

So, over the next three days I re-wrote it almost entirely. (Fortunately, no one had said: ‘Good grief, you can’t change the text at this late stage! Are you crazy?’) Judy had already finished her perfect pictures, and the page design was set, none of which could be changed. I had to write the new words and repetitive phrases in such a way that they would fit snugly into the current design. OMIGOD. It was hard work.

The fresh text was a huge surprise to my husband, to Judy, and to my agent, Jenny Darling. Their reaction? Applause, applause! Thank God. My brain had been on fire for three days and nights, and once again, thank heaven, I had finally arrived at a ‘Mem Fox’ kind of story.

So, there you have it: the long story, with a happy ending, about what appears to be ‘a simple little text.’ Hah, hah!

Now where will Bonnie and Ben go next? Hmmmm.