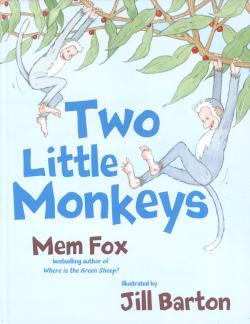 This is the kind of simple book, with tension, rhythm, rhyme and repetition that makes learning to read an easy delight. It’s based—as if this needs explaining!—on the finger game: ‘Two little dickie birds, sitting on a wall, one named Peter, one named Paul …’ I can’t remember how I made the connection between the finger game and monkeys but I do know that I love this rollicking, finger-clicking text. It’s a favourite read aloud because children can so quickly join in, with noisy joy.

All stories lean on other stories in one way or another. There’s nothing original under the sun. In the same way that I feel I couldn’t have written Wilfrid Gordon McDonald Partridge without having read Trina Schart Hyman’s Six in Search of Christmas, I don’t think I could have written Two Little Monkeys with such verve had I not been familiar with Chicka Chicka, Boom Boom by Bill Martin Jr.