Yoo hoo, ladybird! Where are you?

Afloat in the bath with Duck and Giraffe!

Yoo hoo, ladybird! Where are you?…’ 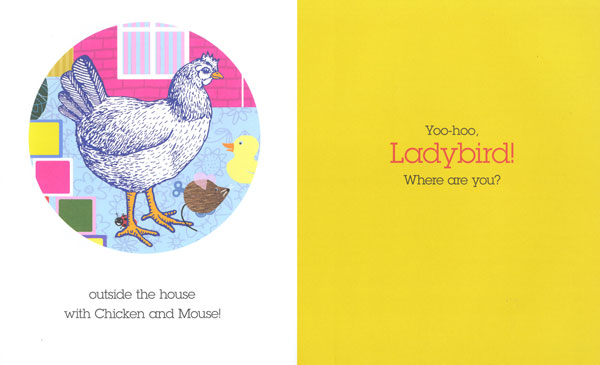 I describe this book as a Where’s Wally? for the very young child, except that the illustrations by Laura Ljungkvist are so divine, so European and so gorgeously inventive that to compare it with anything else does it a massive injustice. The words in this book are an invitation to a game of hide-and-seek to find a ladybird, which is more difficult that you’d think, especially for adults. If you need to know immediately whether to read, borrow, buy or ignore this book, have a look at this blogger’s review, then read on. Yoo hoo, Ladybird! is my most recent book in Australia, published by Penguin. In the USA it’s Yoo Hoo, Ladybug! published by Beach Lane Books, an imprint of Simon and Schuster. They are, of course, the same book inside, apart from slight differences to the artwork when the words bug or bird appear in the exquisite pictures, or when those words appear in the text. Bugs? Birds? Who cares! If you’re anxious that you can’t find the ladybird, don’t worry: a close up appears on the following page in the book. Little kids’ beady eyes are cleverer than ours—they find it almost every time.

I began Yoo Hoo, Ladybird! in October 2009 and finished it in mid-2011. (To find out why writing such a book is so difficult, you might like to read the story behind the writing of Where is the Green Sheep?)  It is, once again, a typical Mem Fox book for the very young with simple language, predictably wrapped in rhyme and neatly tied with rhythm and repetition. It has only 133 words so the two years of writing seems extraordinary, I know. In the end, however, every one of those 133 words fell into place, the syllables sang the right tune, the commas settled into their correct position, and the page-turns worked like the puzzle they were meant to be.

If it takes two years to write 133 words you can see how irritating this sentence is: ‘I think I’ll write a picture book one day when I have the time’, as if time were all that’s needed. I’ve wanted to punch every patronising person who‘s said that to me. Who says writers can’t lose their tempers?  Sadly, or happily, depending on your point of view, I have never punched anyone, no matter how enraged I am.  My mum wouldn’t have liked it.

Here’s an excerpt from a letter to me from Laura Ljungkvist, the illustrator, who is a Swedish American, hence the delicious European feel to the pictures:

When I was offered to illustrate Lady Bug I have to confess I had no idea who Mem Fox was (!) and I am probably the only person in the world of children’s books who didn’t…I remember asking Andrea when she sent me your manuscript, “has she published anything?” (ha,ha) When Andrea answered yes, it was with a heavy heart that I agreed to illustrate “someone else’s baby.”

As I started working on your text I lost myself in it. I found it hard to close my computer down at the end of the day. I was in my space, my comfort zone, where anything can happen but I am the boss! I had none of the responsibilities or angst that comes for me with authoring. It was a place where I could forget about my other problems at the time and just have fun!

I read on your website how much you hate writing picture books. That is good! Knowing who you are now, it would be far too much pressure to do another one. (Just kidding!)

Now that I have done my homework and learned a little about you, your work and your authorship I am truly honoured to have my name next to yours on a book cover!

And here are some reviews of Yoo Hoo, Ladybird!: