Here I am, saved from the heatwaves, unlike our poor magnolias. Temperatures of 44C (111F) nearly killed us all last month. So sad. Anyway, welcome to a new day, a new year, a new decade, a new acceptance of climate change, and a new hope that a government steeped in stupidity while its country burns (ours) will finally stop talking rubbish and start acting sensibly to save what’s left of our houses, our farms, our flora and fauna, and the rest of  our precious environment. As I type, all our windows are closed against smoke haze from fires nearby on Kangaroo Island. And we’re nowhere near smoke-choked Sydney, or the ghastly fires in Victoria and Queensland, which have been so much worse than ours.

But as ever, particularly on the first day of a new year, let alone this first day of the new decade, resilience comes to the fore, and hope springs eternal in the human breast, to quote Alexander Pope in 1733. We can’t go on trashing the world like this, so we won’t. It’s going to be  a time of rapid change—change for the better; a time of excitement, a time of courage and a time of inspiration. At the end of this decade our grandson will be 20 and the world will be unrecognisable. At the end of this same decade I’ll be 83, almost 84, and if things a haven’t changed as I’ve predicted, you’ll see an elderly woman on the streets accosting politicians as if she were a prize fighter and they were a brick wall. I do know that violence is never the answer, but words haven’t worked so far because we’re dealing with idiots. Oh, yes, I’m angry.

Thanks to climate change, the heat in Adelaide and the intensity of the sun’s rays are such that our skin specialist now insists we use suntan lotion every day of the year. It’s a drag, but I obey. Who wants to suffer a melanoma again? But I’m  thankful to be alive still, angry or not, thanks to the doctors, nurses, and brilliant Australian medical system who took such good care of me when I was hospitalised for eight days at the end of November/beginning of December. I had caught a para-flu virus, which isn’t surprising as our grandson had had it first and we had tended him for many days while his temperature fluctuated alarmingly, up and down. I’d never used a thermometer so often. I barely knew how to use one. I didn’t really know until then what a normal temperature was: 36.5C for children and 37C for adults, which is shocking really, in a woman of my age. But I’d never needed to know.

My own temperature soared and then my already pathetic lungs went on strike. I cancelled everything immediately, for months ahead, from my hospital bed. I felt terrible about it, unprofessional even, but when you can’t breathe you can’t move, and you can’t fly, anyway. As an ancient asthmatic, I have only 40% of normal lung function at the best of times, so there’s not much room play with, and a flu-type virus is the worst possible scenario for weaklings like me. (My poor family! They suffered. My daughter’s face…) I have a strong personality so I thought mind over matter would work. I willed myself well, yet found myself still ill. Good grief!  Was this really happening? It was maddening. I couldn’t read—a book was too heavy to hold. I couldn’t listen to podcasts because I was too tired to be bothered. I turned it off the radio as it was filled with such deeply depressing news from around the world . Television, likewise, was tedious and dismaying. What to do, to pass the time?

Write another book, of course! What else? Our entire family loves the poem Jabberwocky by Lewis Carroll  (I always read it with exaggerated drama) and our grandson had recently borrowed it from the school library, an old edition from the nineties, divinely illustrated by Graeme Base. 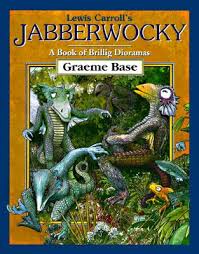 It must have been in my be-fogged, drugged mind. A story idea arrived. God bless all story ideas! I worked on it in my head, without moving from my bed or pillows, without needing to open my eyes, without using any technological device, although I had  my phone and iPad with me, and without even pencil or paper. I was peaceful. I was undisturbed. I had the gifts of time and silence. What more does a writer need, after all?

Eventually, in desperation, in case I forgot any of the story, I asked my husband to go the large Officeworks a few of blocks from the hospital to buy me six 4B (soft) pencils, a yellow A4 legal pad, an eraser and a pencil sharpener. I always start with pencil. It helps my brain work slowly and creatively. And I like yellow paper. But the softness of 4B pencil means they have to be to be sharpened more often, hence the need for a sharpener. And the mistakes and infelicities obviously required an eraser. I was all set up. Everyone disapproved of my writing-not-resting, but as I said to the doctor who looked in horror at the discarded, crossed-out drafts all over my bed, I was resting in a way: my mind was off myself. I was in a Zen space, calm, happy. When things went badly with the writing, as they invariably do on the way to success, I put everything away and went back to meditating. Honestly, it was heaven! And now I’m fine, and I’m on the tenth draft of the story, which may take a while to get right. If the Tiny Star is anything to go by, it could be another six years. God forbid. Will I be alive by then?

All of this is recent. Fading fast into the happy past, from October/November is the truly wonderful  book tour for The Tiny Star, with events from Bowral to the Barossa, Sydney to Brisbane, Melbourne to Adelaide. I adore introducing new books to new audiences. The reactions to The Tiny Star made me realise I could still write at my age, and still move people through the placement of certain words in certain places, in certain sentences. At 73 it’s easy to lose self-esteem and lose faith in one’s value to world, so the book tour was both affirming and exciting. Among dazzling events, the stand-out interviewers were my publicist, Zoe Bechara, from Penguin RandomHouse, who was and still is expecting identical twins, can you imagine?; Michael Williams at the Wheeler Centre in Melbourne, who had the audience in stitches with his wickedness; and believe it or not, one of my new heroes, whose book Boy Swallows Universe, I have raved about several time before: the award-winning journalist and writer, Trent Dalton. I’m not often humbled, to tell you the truth, but I was indeed humbled when Trent agreed to be the other half of the In Conversation with me at the State Library in Brisbane. It was like a lovely chat between friends, but he drew from me, nevertheless, all sorts of aspects of my writing that I hadn’t mentioned before. Here’s a photo of us: I am gulpingly (new word?) grateful to everyone at Penguin RandomHouse for the work they put into The Tiny Star. An author is only part-responsible for how a book turns out: many others contribute, not least of whom this case were my publisher, Laura Harris and the illustrator extraordinaire: Freya Blackwood. There’s been good news about the two new books: super reviews of The Tiny Star in Australia (in Reading Time, for example); and the happy fact that Roly Poly was chosen by Amazon in November as their Book of the Month for 3-5 year olds. I found that staggering when I thought about the number of picture books that must have been published in America this year, in time for Christmas. A huge compliment, and once again, very affirming for anyone with wavering self-esteem.

More good news appeared last week in the pages of the Melbourne Age and the Sydney Morning Herald: ten books were listed as the bestselling books of the past decade, adults’ and children’s books combined. Where is the Green Sheep? illustrated by Judy Horacek was no. 2, and Possum Magic, illustrated by Julie Vivas, was no.4. I was the only writer to have two books on the list, both of which had been published long before this last decade even began. I know. Thrilling, right? The only other book on the list that was published prior to this decade, and is still selling well, all the way through it, was The Book Thief by Marcus Zusak. I felt I was in fine company.

I can feel my mother’s voice buzzing in my ear, telling me to stop self-aggrandising, so I’ll leave you in peace at this point. (I won’t let the website languish like this again, but illness was my excellent, if undesirable excuse.)

Here’s to happy new us!