Hello, hello, especially to those holed up in your homes, on the edge of hysteria. I’m with you.

Corona virus. There is no other topic. I’m staying home voluntarily, due to my being 74 with highly compromised lungs, and therefore in the Demographic Danger Zone. I know I couldn’t have caught the corona virus late last year as it was too early for that, but I did suffer from a nasty viral lung infection that was undiagnosed at the time. The specialist called it a ‘para-flu’ infection. I was so weak and lacking in breath I didn’t have the strength to hold a book, make phone calls, or even listen to the radio or podcasts. I was in hospital for 8 days, as I told you in my last blog many months ago. So, I’m nervous. In other words, Ms Corona, I’m unhinged and out of control, and I want to write EVERYTHING IN CAPITAL LETTERS WITH HUNDREDS OF EXCLAMATION MARKS!!!

To keep my spirits up, I’m determined to keep exercising. It’s about mental health, after all, as well as physical health. My outdoor fitness class of 28 years was closed on Monday, and I’m embarrassed to admit that after it was over I howled all the way home. You’d think that someone aged 74 would be enough of an adult by now to be able to get a grip. Sorry, but no. Not in these international circumstances. I was probably weeping for the whole world, not just the closing of the class. This is my exercise gear, dying  a death on on the dining room floor. The weights are 5 kilos and 6 kilos. I may not be able to lift a feather, let alone heavy weights when all this has finally passed.

Anyway, from now on I’m running up and down the stairs in our house ten times before 10 am. After five such runs, I’m heaving and panting and nearly dead, and clutching the banister, so I may be hastening my exit from this world, not preventing it. But I persevere till I’m done, and done in. I’m also aiming to do 40 step-ups before 4 pm (note the alliteration in ‘ten times before ten’, and ‘forty times before four’) but after 18 step-ups I’m hanging on to my knees, and after 40 I need mouth-to-mouth resuscitation.

Many of us are dealing with current stresses for the first time, as you know, such as home-schooling. By 9:30am on my grandson’s first experimental distance-learning day, he and I were in tears. Oh, yes, it’s a highly emotional time, so the tears are never really about home-schooling or the closure of a fitness class, it’s our brains readjusting themselves again and again to rapidly changing, unnerving, psychologically challenging conditions.

As to the home-schooling, I handed that over to my steadier husband in the end, but not before I’d learnt a lot about the way Aboriginal people used to use ‘cool burns’ to regenerate their land, a land we now share. It’s appalling that the invaders of Australia forgot to ask the original residents how to avoid the hideous bushfires that burned so much of Australia this last summer. Our arrogance has been our undoing well and truly in that regard.  But ah, our scenery! I love it. The sight of a single soaring gumtree can lift my heart to the skies. We found ourselves last week on a totally deserted, typically Australia dirt road,  gum trees all around, beautiful and unburnt. We were lost in the Adelaide Hills, looking for new season apples. Divine. Until we’re prevented from doing so, we’re going out for scenic drives in the way that old people do, because good grief, that’s what we’ve become: old people.

Now that I’m confined to the house, a new irritation has been catering sensibly for two meals a day without constantly dashing out for this and that. (I’m not including breakfast, and this is for only two people, and the daily after school visit  from a certain ten-year-old, dear to our hearts, so I’m modifying my moans.) I mean, will the food in the fridge and the cupboards last? Last until what? Last until when? I don’t even understand the question, let alone know the answers. My mind is as scrambled as the eggs we’re rapidly running out of. The supermarkets are still open, and I know food will not run out, but nothing is the same anymore, and the innocuous phrase ‘a dozen eggs’ has taken on new meaning.

[I’m not going to mention the lack of clear direction from our leaders because I don’t want the internet to seize up. Just in case you were wondering, at this point, why it hadn’t rated a furious mention.]

So, back to the home front and a rant about second helpings. See below the quinces that I stewed yesterday. Quinces are a nightmare of hardness to peel and chop. They require a lot of sugar (very bad) and a several cloves, both of which are obviously diminishing in my usually well-stocked pantry. It takes three painstaking hours of very slow cooking to turn them from yellow to delicious red. A certain older member of my household asked for a second helping. All that work for SECOND HELPINGS? At a time of international viral crisis! What was he thinking? I allowed him to spoon out a mean and minimal serving, to show I have the kindest heart on the planet, and secretly and immediately froze the rest.

Kindness is going to be needed by all of us. And generosity. And big heartedness. I’m aghast and sickened and frightened—aren’t we all? —by the vast, horrifying and all-too-sudden number of job losses in our country and around the world. I feel deeply and terribly for everyone who is newly unemployed, especially those who, even a few weeks ago, could not in a million years have envisaged that such a calamity would befall people like them. I’m sleepless with worry about them. I hope we all find a way very soon to help those shell-shocked with need.

Talking of kindness, I had a brief phone call from Zimbabwe yesterday, from an African ‘girl’ I taught in 7th Grade in 1968. (I was volunteering in a school for what was then known as ‘handicapped children’.) She’s now an old lady like me. I was overcome that someone in her financial situation would care enough to take the time and money to phone to see if I were OK. So much of the world is so good that it’s a pity the rest of it is acting in such an appalling, self-centred, short-sighted, selfish, manner. You know who I mean. I don’t need to spell out names.

I took my life in my hands this week and went OUT to the hairdresser for the last time, for how long? My hairdresser, Nathan (at work below), was staying open until midnight that night to accommodate all the female clients who needed more than half an hour to get their hair done. ‘Half an hour only at the hairdresser’ had been the decree from on high, if you recall. Who thought that one up? A male, and probably a bald male. THIRTY MINUTES??? Wake-up, blokes. In six weeks’ time we’ll all know our own true hair colour and that of all our friends, and that of every television presenter as well. Not that it will matter much, as we’re not seeing our friends anyway, except on FaceTime and Zoom. 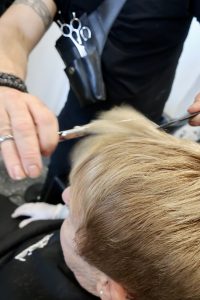 On the only other occasions when I leave the house, which are to take a walk, I’m shocked by the emptiness of the streets and carparks. It’s eerie, spooky, unnatural and frightening. Gorgeous walks that are usually packed are empty. This is me walking alongside the Patawalonga in Glenelg, not far from where we live. No one there except a husband taking photos. No need for social distancing. It didn’t feel good. The world as we have known it has come to a crashing end. Before I sign off, a big hand to all the doctors, nurses, teachers and many others who are forced to be heroes in this current situation. I’m more familiar with teachers than any other group. They’re off their faces with stress, tiredness, and anxiety at the moment. Our daughter is one of them. They’re at the tattered end of their tether, doing their best in the hideous situation of ‘to-close or no-to-close the schools’, and as far as I can see aren’t getting the appreciation they deserve. After an hour and a half of home-schooling last week I sent an email to my grandson’s Year Five teacher urging her to apply for a pay rise. She needed to know I was inside her brain and that I cared about her.

Finally, a bit of business. I’m receiving many requests from teachers and others for permission to read my books in digital-teaching situations. That’s fine. Note that I read all my books on  this website. My suggestion is that you go to the website home page and click on the Books section. https://memfox.com/books/ Then click on an individual book eg. Possum Magic. Then click on: Listen here. I’d be very grateful if you listened to me reading the books twice to get the rhythms and cadences right, so you can read them nicely yourselves, with my voice echoing in your heads.

I do most sincerely hope that you and your family are OK and will be OK, and that you and I will be alive in six months and come out of this dreadful phase with enough vigour to carry on as best we can. I might even write a book when my brain stops THINKING IN CAPITAL LETTERS. But there won’t be a character called Ms. Corona. She’s too wicked for fiction.

Huge hugs at a safe distance,