Baby Bedtime sends me to sleep

This month’s audio stories are Baby Bedtime (I know it’s its second month on the playlist but it’s so new it’s as demanding as a baby); Koala Lou; and especially for the Christmas season: Wombat Divine.

I can do anything a thirty-five year old can do, except that it now takes me about thirty-five years to recover from it. On the seven-city book tour for Baby Bedtime, around Australia, I had what appeared to be boundless energy. Have a look at this Channel Seven interview. I almost bounced off the screen but the panel, half of them in tears over the book, held me back and kept me on track.

I smiled for days on end. I threw myself into radio and tv interviews. I talked more than the interviewers did in phone interviews. I signed books for more than two hours on several evenings, chatting to everyone, ignoring any twinges in wrist, arm or shoulder, just as any thirty-five year old would. And even though my heart quailed and I thought to myself, ‘I can NOT do this, I’m far too old,’ I entertained hundreds of children at various events, indoors and outdoors. I was so happy about how the tour had gone that I literally skipped, like a five year old, out of the studios of 6PR in Perth, on November 21st when the whole thing was over.

And then I came home and came to my senses. I’m sixty-seven. I’m a grandmother. It’s crazy to pretend otherwise. It just doesn’t work. I’ve slept like a child at every opportunity since, and I’m not talking inconsequential nana-naps here, I talking the deep, endless sleep of teenagers. I’ve had to snap my eyes open this evening to wake up the fact that it’s December already. I promised to tell you what’s up, at least once a month and I’d be sorry if I let you down.

In brief then, Baby Bedtime is doing wonderfully! Thank you to everyone I met on the tour, for loving it and buying more than copy!

And on another matter, if you live in Adelaide and would like a Possum Magic birthday cake for a child you adore, the very clever Kerryn Caracovitch will make you one. She sent me this photo of the cake she made for her daughter’s seventh birthday in November and I drooled over it! She can be found at [email protected]

I hope Christmas is magical for you. We have an almost-four-year old in our family so it will be hysterical for us this year. He’s hyper-aware of the existence of Father Christmas but slightly bemused by the fact that the said Santa Claus isn’t part of the nativity scene. I mean, isn’t he one of the three kings?

All I want for Christmas is sleep, please. And then a little more.

In case you want to know what I really look like, here are some excellent portraits drawn by children in Perth during my book tour… 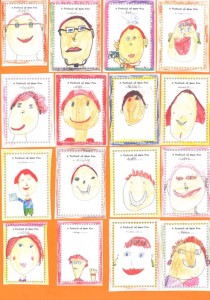