I like a surprise or two. They keep life spicy.

An early and exciting surprise this last month (April) was having my latest book, Baby Bedtime, shortlisted for the Children’s Book Council’s Book of the Year awards. Like the Caldecott award in America, this will be an award for illustration, which cuts me out well and truly, as I can’t even draw a stick man! However, I’m thrilled for the gorgeous Emma Quay, whose divine artwork graces the pages of Baby Bedtime. (Oh, those tender, lovable elephants!) Emma has won this award before, clever clogs that she is. She was the first person to text me the shortlist information and we were both dizzy and dancing at the news. I was in Sydney airport at the time and found myself skipping to the plane. Who says aging authors can’t skip? The awards are announced in August. Where is the Green Sheep? won this award nine years ago. Judy Horacek was/is the illustrator. My books don’t win book awards, on the whole. Perhaps judges assume I don’t need them, but I do! I do!

I had another surprise (photo later…) at Elizabeth Downs Primary School, north of Adelaide. I claim not to be visiting schools any more but somehow I still find myself from time to time in classrooms and school halls talking to crowds of glorious children. I was at Elizabeth Downs Primary for the Premier’s Reading Challenge in South Australia. I’m an ambassador for the Reading Challenge which why I find myself in schools when I say constantly that I am NOT visiting schools anymore! In my state, when children read twelve or more books a year, they receive certificates and then medals of increasing honour as the years progress. I love this program as it honours and values readers in the same way that sporting success is honoured. 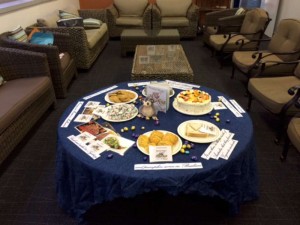 So what was the surprise at Elizabeth Downs? A delicious morning tea based on the foods in Possum Magic. It may have been the two-hundredth Possum Magic morning tea that I’ve been served in the last 31 years but it was a still a marvellous surprise and absolutely scrumptious, as always. The most down-at-heel, disadvantaged schools are often the ones that treat me most kindly, and I’m always incredibly moved by that kindness.

This email (I received permission to re-print it here) speaks for itself, as does the out-of-focus photo. The Duke and Duchess of Cambridge are otherwise known as Prince William and Kate. 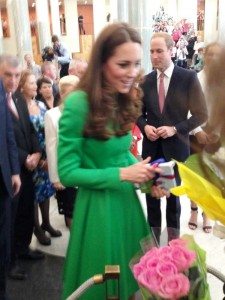 Yesterday my family were fortunate to meet the Duke and Duchess of Cambridge while they toured Canberra. We had waited for nearly four hours in the Parliament building for the opportunity to wave and cheer. My son Lyle who is four had been desperate to give a copy of his favourite book, ‘Where is the Green Sheep?’ to Prince George. As the Royal couple passed they stopped and the Duchess approached Lyle and my daughter Lily who is eight.

After a handshake, introduction and a short discussion about the book, my son passed a copy across. I have attached the photo taken after the event by my somewhat shaky hand. The Duchess is holding the book wrapped in some red, white and blue ribbon. Both children and my wife were overjoyed having had the opportunity to meet someone who is usually only an image on the television or in the press. The Duchess promised that she would read the book to Prince George.

I wanted to drop you a short note to tell you that your book was handed to the Royal family and to thank you for the enjoyment your books provide to my family. This book in particular was chosen as it was the first book that Lyle took an active interest in and my daughter used to sit and read it to him.
Best wishes
Correy
——-

The last part of April was a frantic, hectic writing time, which is unusual for me. You’ll know by now that I have no writing routine. I have no writing discipline. I avoid writing whenever possible as it’s so hard to write well and so easy to write badly. But when an editor comes to stay what can a writer do? Run? Hide? Leave the country? No, sadly. Knuckling down is the only option and that’s what happened when my American editor, Allyn Johnston, came to stay. 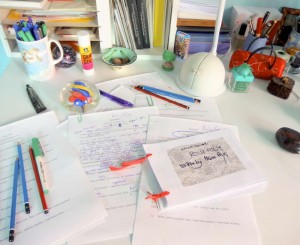 If the story is ever published I’ll post the first and final versions on this website to give a clear picture of why writing picture book texts is so detestably difficult, especially if you want your readers to cry at the end. We worked until minutes before Allyn left the house, in the crumbs and debris of our final dinner. Her bags were packed and ready at the front door. 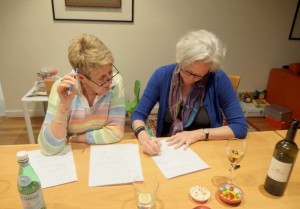 The wine is hers. The water, mine. My husband took the photo and tip-toed out backwards, so as not to disturb the creative, last-minute tension.

I’m forever surprised by how physically exhausting writing is. I think it’s because the brain has to be like an acrobat, jumping through hoops, leaping over hurdles, rolling forwards, tumbling backwards, zooming round this corner and that, always steady, always focussed, alert to sudden changes of direction, yet keeping the overall goal in mind. The afternoon after Allyn left I slept soundly for three and a half hours. I didn’t even dream of polar bears.

Now you’ll have to excuse me. My next blog will not be for six weeks. I’m off to the USA in late May for Book Expo America in New York where I’ll be speaking at a huge breakfast. (I mean a huge audience, not the breakfast itself. I will eat nothing!) The other authors at the breakfast will be Carl Hiaasen (whose latest book is for children, although my husband is a great fan of his crime novels for adults), and Geoff Kinney (Diary of a Wimpy Kid). After that I’m going to Hawaii to another conference where I’ll be speaking to would-be writers and to teachers of writing. The Hawaii group is like family. It’s my third, or even fourth visit to a Read To Me event.

See you in mid-June!