From the sublime to ridiculous in a couple of weeks

June disappeared, just like that! Sorry! It was similar to crossing the international date line to and from Australia: on the way over to the US I arrive in Los Angeles on the same day, a few hours before I leave, thereby having to live the same day twice; on the way back, which is even more confusing, I leave at night on a Friday, for example, and arrive in Australia on Sunday morning even though the flight is only overnight. The intervening Saturday whooshes out of my life without a trace, never to be lived in by me. Which is how June feels: gone—but not without a trace. The traces were many. It was a fabulous month, an incredible trip to America, and one I’ll remember forever, even though it was visit-to-America No.113.

The highlight was this. It lasts 14 minutes and 39 seconds…

In case you didn’t have the time or the inclination to listen to the speech, it happened just before June at BEA on May 30th in New York. (BEA stands for Book Expo America.) It’s the huge, annual bookselling-and-buying extravaganza, at which all the US publishers gather to sell their new offerings to all the US booksellers, so you can imagine the glitzy, intense, and thrilling atmosphere. The event I spoke at, to promote the publication on August 26th of Baby Bedtime, is called the Children’s Breakfast (Children Breakfast link) . Each year three authors present for 15 minutes each: a young adult author, a middle grade author and a picture book author. Carl Hiaasen was the young adult author. (My husband loves his adult crime novels, set in Florida). Jeff Kinney was the middle grade author who’s wildly famous for his Diary of a Wimpy Kid series, which has sold 125,000,000 copies worldwide. And then there was me. I was the oldest by far, the shortest by a mile, the only foreigner and the only woman. I was definitely the odd one out!  I mean, look at this… 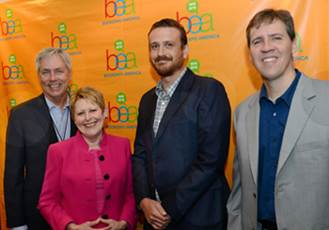 The tallest man in the photo was Jason Segel, the MC at the event. He wrote and starred in The Muppets, and stars in the sitcom: How I Met Your Mother, and in a new movie: Sex Tape, with Cameron Diaz, among other impressive things. All three of these guys: Jason, Jeff and Carl were charming, funny, kind and self-effacing. It never ceases to amaze me how nice highly successful people are, as opposed to those who’d like to be just as successful but will never make it. Ahem…I will say no more!

Anyway, the entire New York part of my trip was marvellous even though it entailed work—no! it was marvellous because of the work, which I had been preparing for many weeks in advance. Needless to say, I socialised also, with lots of old friends in the book world, including my adored friend and editor, Allyn Johnston, and others from Simon and Schuster; and authors whom I love and admire, especially Marla Frazee, writer and illustrator of two of my favourite picture books: Boot and Shoe; and Boss Baby. She also illustrated our book: Harriet, You’ll Drive Me Wild! (I have copies!  The first ten people to request a signed copy, via my assistant Edna, can have one. It’s for parents who lose it and need to make it up to their shocked children.)

By chance, while I was in New York, the NY Public Library had a wonderful exhibition called Why Children’s Books Matter. I saw the original umbrella belonging to PL Travers, writer of the Mary Poppins series, whose umbrella created all sorts of magic. I also saw the original stuffed toys of Winne-the-Pooh, Tigger, Kanga and Eeyore; handwritten letters from Beatrix Potter and Maurice Sendak; and many other thrilling treasures. I completely forget that I’m a writer myself when I’m in those situations. I ooh and aah along with everyone else, agog with the delight of sharing the hitherto secret, inside story.

Another highlight in New York was meeting Laura Ljungkvist for the first time, the illustrator of Yoo Hoo, Ladybird! I’m crazy about her illustrations for this book. She created a puzzle on every second page, which children solve more quickly than adults. It’s kept my audiences thoroughly and hilariously engaged, every time I’ve read it, from two year olds to eighty year olds. Laura is a Swedish American so it was fascinating talking to her about the two cultures, their similarities and differences. She’s intense, a very fast speaker, a brilliant artist and a loving, absolutely lovely person. It’s always fabulous to meet an illustrator for the first time: such excitement to see who the person really is, and what they’re like. Many of my readers find it extraordinary that I don’t meet, or talk to, or write to the illustrators of my books until the book is published. Sometimes, sadly, I never meet the illustrators, and there are many I’d love to meet. From New York, a long, eleven hour flight to beautiful Hawaii. This was my third visit to Hawaii, and each time I have been hosted by the gorgeous people at Read To Me International. Hawaii may be beautiful to look at it, but for me most of its beauty comes from the people themselves who exude kindness, friendliness and warmth. Their smiles are ever-present, and their fear that you may go hungry is hilarious! Once again I kiss the feet of fabulous Lynne Waihee who organised it all. In Hawaii I swapped hats, from writer to teacher—I gave three talks to teachers, mostly about writing and how to teach it—but I’m never exclusively one thing or another, as writing and teaching blend into my life in such a way that I find them inseparable.

In my time off in New York, Honolulu and on planes and in airports I read so many books I can barely remember the titles. I enjoyed all of them but I especially loved the ones with stars, below; and I have included other recent wonderful reads as well:

And I’m currently reading and loving: I, the Divine by Rabih Alameddine

I should also include (and I will in my next blog) recent big-hit picture books as I am an expert on those, living—almost! —as I do with our adored grandchild Theo, who is now four and half and beginning the journey into reading, which sets me all a–tingle with amazement and excitement, even if the words he reads are as easy to work out as ‘snap’ or ‘pigs’. Reading to Theo is a daily highlight in my life. He loves me to read sentences backwards. Heaven knows why! It makes him hysterical with laughter. He almost falls off the couch.

When I finally arrived home again and came down to earth I spent what seemed like days on my knees, in the rain, carefully weeding the new front lawn, which should have had no weeds in it, darn it; and further days, or so it seemed, cleaning the oven, again on my knees, before I was told that I have pyro lytic oven-cleaning program. Darn again! As I did both those necessary, messy, boring jobs, I looked back at the glamour of BEA and Hawaii in some kind of Cinderella disbelief. It was very funny, really. I should have had my husband take photos of me surrounded by mud or cleaning products. Had that princess really been me? It’s always good to get back to normality and to be grounded, in every sense, once again. And to be back in the bosom of my family: so lovely!

You’ll know by now that the only reason I weeded the lawn and cleaned the oven is because anything is preferable to writing picture books. I have two sentences, perhaps three, to write before I complete my latest story, but getting them right will be excessively painful so I’m letting my subconscious do the work for the time being. Perhaps I can clean out the filing cabinets as my next hideous avoidance tactic.

The best book news to greet me after my homecoming was from a late-May edition of Who Weekly, which a young friend had seen and cut out for me. Drew Barrymore was asked to name five things that make her happy. No. 2 was this:  ‘Picking out 20 books a night with Olive. She can recite all of Madeline. Where is the Green Sheep? is awesome. I act it out for her.’ Oh, that green sheep!  How I love her!

As you may have discovered over the last few years, I don’t go to schools anymore. I’m too tired for a start, but I don’t like to be a celebrity either, and have to deal with all that kind of stuff.  However, as an ex-teacher I often miss little kids and classrooms, and the interactions that happen between teachers and taught. When I got home from the States there was, in my pile of mail, a mass of gorgeous, original, lively letters from a class in a school only three suburbs from our house: Glenelg Primary School. So instead of writing back I called the school and asked if I could come over and chat to the children for half an hour the following day. Secretly! It was so fantastic I could have cried. We had a wonderful time. Children are wildly enthusiastic, bright little buttons, whose sophistication is often underestimated. By a lovely coincidence, the teacher of the class was one of my ex-students from Flinders University whose name I hadn’t recognized because she had married since I had taught her. And then I dashed to my car in pouring rain—and almost no one but the teacher, the principal and a few of the admin staff knew I had been there.  I like it that way: the children and I can be relaxed and just chat; and I read a few favourite books; and then I leave and am home in ten minutes. Heaven!

So that’s June.  Look for more news on August 1st.  Until then, here’s where I will be in August:

Friday, 1st August 2014 A ‘ Sheepvention’ in Hamilton, Victoria, Australia. Hamilton is a wool- growing/producing centre. During this event green sheep will be looming large and I will be looking for them!