A few days ago, on March 31st, POSSUM MAGIC turned 31. The older I become the weirder it feels to be the author of this iconic book. It’s such a phenomenon that it seems to have a life of its own, outside my own life, as if it’s a vague acquaintance who I might not recognise, should we pass each other in the street. Julie Vivas, the illustrator, feels the same. Every time we think that everyone in Australia must surely have a copy by now, something happens, such as the 30th anniversary boxed edition last year, and the sales go through the roof yet again. Obviously it’s pleasing and even thrilling, but it’s unreal at the same time.

Two big dramas last month: I was in hospital for six days with entrenched asthma. I’ve been a chronic asthmatic for 56 years but have been hospitalised only seven times, so this one was serious. It started as a virus then became a deeply-seated bacterial infection, and although I thought I was doing everything right according to my asthmas plan, I was still in semi-distress after five weeks. If you knew me well you wouldn’t be surprised to know that when I finally realised how ill I was I waited until I had had a hair cut and colour, made chicken and sweet corn soup for my husband, emptied the dishwasher, and taken the dog food out of the freezer before I asked my husband to take me to the hospital. Intravenous antibiotics eventually did the trick and I now feel better than I have for years. Much love and gratitude to Dr Robert Adams and the staff at Ashford Hospital. 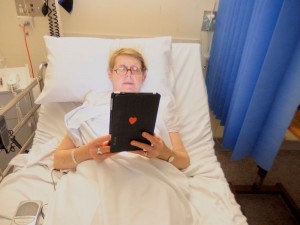 Talking of the nurses, one of them asked jokingly if I needed a restraining order against the young nurse-fans who were caring for me. I signed a lot of books in those six days: books from nurses’ childhoods and books newly purchased. I didn’t mind. It passed the time and made me remember I was a writer not just a weepy patient who was impatient to get out. And I had my iPad with me so I never felt cut off from the world, or from e-books. I read Elizabeth Gilbert’s The Signature of All Things and loved it.

The second drama was expected but nevertheless life-changing for our family. Our daughter, Chloe, lost her seat in parliament in the state elections. Usually when people lose their jobs it’s a private affair but a high-profile politician loses in a high profile way, so it was tough. We knew that the redistribution of electoral boundaries would make the election fairer so she could not win, and would not win, but she fought until the last minute possible. She is now, as theatre people say, ‘resting’ between jobs, recovering from a fascinating, privileged, gruelling eight years and it’s a pleasure to have her lovely, hilarious company again. Theo is particularly pleased to have his mother constantly there, rested, happy and untrammelled by work, although he doesn’t quite understand why. He was devastated by the election, only because all the posters of his mother in our streets were gone overnight. He loved saying hello to her every time we passed one. Labor won the state election against all the polls, pundits and predictions, which lit a brilliant light in the darkness of Chloe’s election loss. The state of South Australia is the only state in Australia, and federally, which is not Liberal. We held out against the conservative tide. I am so proud of us. (For foreigners, the ‘Liberal” Party in Australia is the conservative party.)

So that’s news this month. Almost. Today —I am actually typing this on April 1st—is destined to be 36ºC (98ºF). It will be the hottest start to April on record. Our current prime minister, Tony Abbott once said ‘Climate change is crap,’ which is one of the many, many reasons to be saddened and dismayed by those who lead us into the valley of stupidity. Forgive me! I know I have been very political. I’ll curb myself next time.

In a couple of weeks my beloved American editor, Allyn Johnston, is coming to stay for ten days. I love sitting with her at my dining room table with papers everywhere, and pencils and staplers and erasers and glue sticks, working on stories that change from rags to silk, as it were, under her guiding hand. Often when we sit side by side at the computer I will type something she’s just about to suggest, so closely are out minds in tune with each other. It makes my hair stand on end. It’s a privilege to be able to be working, as ever, at the age of 68. In fact I’ll probably be publishing books after I’m dead! Illustrators can take years to complete their artwork so I can see a time when a book will appear after I’m safely in my grave. People will scratch their heads and say, ‘But didn’t she just die?’!

The stories you can hear on the website in April are Koala Lou, Tough Boris, and The Magic Hat.

All the best until May!