And so the year begins…

I’ve just looked at the title of this blog (I edit as I go along) and I know that people who know nothing about writing will tell you that you can’t start a sentence with and, but or so, but as you see, I have both in my title. It’s fine. In Possum Magic I wrote different sentences starting with all three of those forbidden words: one each time, not all three at once. Those same ignoramuses will tell you that adjectives are good. They’re not. They’re a lazy way of writing. Of course they exist, so they have their uses, but less often than you’d think. Where was I…?  And how did I get on to that?!

I always feel sad on Australia Day (for non-Australians, that’s Jan 26th) as it signals the end of the blissful summer hols and the beginning of the working year. Sob. It’s as hot as hellfire here in Adelaide, South Australia. We have had two heat waves already this summer, and in mid-January we were hottest city in the world on one particular day, (113º F or 45º C), mostly because the really hot places on earth are in their winter season at the moment.

Summer is of course ‘Fat Novel’ reading time, when you read the books you wouldn’t attempt during the rest of the year. The best novel I read this summer, which was 800 pages, so not for the fainthearted, was The Luminaries by Eleanor Catton. It had recently won the major book prize of the world: the Man Booker, which made me nervous—awards are sometimes puzzling and occasionally enraging— but this book held me spellbound and I finished it in a week.

Talking of good stories (!), before I forget, my audio stories on the website this month are: Two Little Monkeys, Sleepy Bears, and Time for Bed. 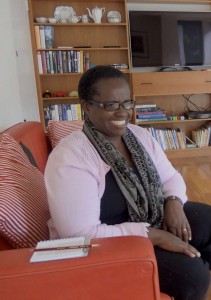 The other lovely thing about summer is seeing friends, and more friends, from close by and far away. One of the people who stayed with us for a couple of days was Tiwe Richards who was a house-girl in my parents’ house in Africa when she was only sixteen.  My dad realised how clever she was and with his help and encouragement she received an education and she is now a consultant in kindergartens across four African countries. We have kept in close touch with her and her family ever since. Her son is mental health nurse in Adelaide (he migrated here from England four years ago) and we see his family often. Tiwe’s younger granddaughter was named for my dad: Nkwali, which is the African for ‘partridge’ in southern Zimbabwe. (Partridge, you may recall, was my maiden name.) I love these circles in my life. 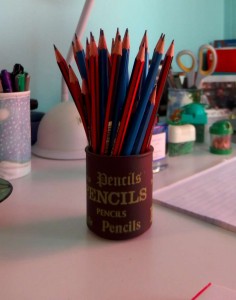 After a long break of writing nothing for 18 months I’ve taken out the pencils again—hurrah!— and have begun another story, but my brain has fried several times in the heat, and to date the drafts are so bad that if anyone ever finds them I’ll deny I wrote them. Who, me?  Never!  As must be obvious, I am a writer of no particular fixed routine. Not to have written anything for the last 18 months doesn’t bother me at all.  Somehow the ideas float in when the time seems right, and the words eventually settle into their rightful positions in a way of working that is both hazy and intense.

My first foray into the working world is in Brisbane on February 15th where I will be speaking at an educator/parent forum run by the Crèche & Kindergarten Association. For further details contact Alison Evans at: [email protected]

I will also be speaking twice at the Adelaide Writers Festival on Saturday March 1st at 10 am for the little kids and 1:30 pm for adults, with Andy Griffiths.

Other news is that my autobiography: Mem’s The Word, has been published as an e-book. It’s available from: <http://www.ligatu.re/book/mems-the-word/> 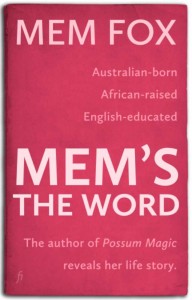 The USA edition, called: Dear Mem Fox, is still available in book form but the Australian edition has been out of print for a long time. I’m thrilled it’s back in circulation.  It’s the adult novel I have never written, except it’s all true.

It’s as hot as hellfire here in Adelaide, South Australia. We have had two heat waves already this summer and in mid-January we were hottest city in the world on one particular day, (113º F or 45º C), mostly because the really hot places on earth are wintry at the moment.

Theo, now four, started kindergarten a few days ago, in tremendous excitement. I will I will miss my exquisite interaction with him, although I’ll still see him daily. It will free me up to write a little more and sleep a little more often, so it’s both heartbreaking and fantastic. For those of you not in Australia, our kindergartens are not attached to schools. They are stand-alone pre-schools where children learn through play. It’s only two and half days a week which is a perfect preparation for ‘big school’ next year. (SOB: big school so soon?)

Whoever you are, wherever you are, I hope 2014 grants all your wishes My main wish right now is to lose enough weight to be the same weight as my middle sister Jan, who lives in Italy but who is coming to stay in a few weeks’ time. We are still competing, after all these years! All I’ve done is to give up bread and refined sugar. It’s brilliant. The weight drops off like magic.