The Australian subtitle is: How your child can learn to read before school—and other read aloud miracles.

The American subtitle is: Why reading aloud to our children will change their lives forever.

Inside they are same. 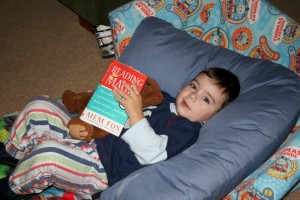 What an advanced reader!
(Let’s hope this poor child found something more to his own interest after this photo was taken.) I began to write Reading Magic in 1997, the year after I retired from the university. I should have written it years before, for my own students, but life and teaching got in the way. After 24 years of teaching teachers how to teach literacy I had come to know that for a child to learn to read with ease, the process of that learning has to start long before any trained teacher enters that child’s world. It was obvious, as I observed children making their acquaintance with print, that the children who had come to school without any exposure to books, stories, songs or nursery rhymes, struggled to make sense of the written word. The contrast between those children and the ones who had been read to, regularly and often, was heartbreaking. I couldn’t stand it. It’s such a delight to read to little kids, from the day they are born, that it made me mad and sad to realise that so many parents were missing out on the joy of it, and that so many children were being disadvantaged and held back due to the lack of books in their lives. And it wasn’t just the less well-off parents who were missing out: many middle class, busy parents weren’t reading to their children either. Something had to be done.

When I was writing the first drafts of Reading Magic I was newly-retired and still writing in my academic style, which made the book horribly dull and uninteresting, and often incomprehensible for the general reader. Fortunately, Allyn Johnston, my famous editor, had a three year old child at the time. She made many demands of me and asked me many clarifying questions. She told me to write the book as if the reader were lying on one of my couches while I was lying on the other, chatting in a gossipy fashion. All the academic language was removed and the book-length was cut in half. Cartoons were added, by Judy Horacek, who later became the illustrator of Where is the Green Sheep? and Goodnight, Sleep Tight. Reading Magic can be read in one sitting. It’s inspired many parents and changed many lives. It may be the most important contribution I have made to the world. Certainly, if it isn’t mentioned at my funeral I will resurrect and talk about it myself. Who says babies don’t love books? Look at the happy concentration! I wish he were reading a book of mine.