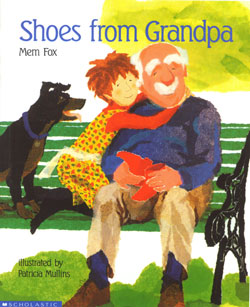 One night in May, many, many years ago, as summer was changing rather suddenly to winter, I lay in bed wondering whether Chloë had enough warm clothes. In my head I said, ‘I’ll buy her some socks from the local shops.’ The rhythm of the phrase seemed familiar, yet incomplete. After a few minutes I remembered the line I’d been trying to think of, from The House that Jack Built:

‘This is the cat that ate the rat… (I’ll buy her some socks from the local shops)  that lay in the house that Jack built.’ (Da-da-da da, da da da da da)

I couldn’t sleep. The pattern was easy to conquer and I was on to it!

‘I’ll buy her some socks from the local shops, to go with the shoes from Grandpa…’

But the rhymes were difficult. Nevertheless I had the bit between my teeth and spent the next few months honing the story.

Two infelicitous rhymes remain in the published text. I hadn’t realized until I read the book aloud in American English that the American accent would change the rhyme of laugh and scarf, both of which are pronounced ‘ahhhf’ in the English and Australian accents. In the USA I had ‘laff ‘ and ’scorrrrf.’ So I have to teach American kids the English accent when I read the book in the US. They sound very cute.

The other rhyme that still bothers me a little is ‘blouse’ and ‘bows’. In my final draft I had written ‘blouse’ to rhyme with ‘flowers’ but the editor and illustrator were accidentally working from not-the-final draft. When I discovered the mistake it was too late to rectify it because the illustrations had been done and they showed lots of bows! Ah well. These things happen and we move on. The books still works—in much the same way as Hattie and the Fox. The same wonderful illustrator, Patricia Mullins, did both books. She actually knitted the scarf that appears in the collage illustrations. 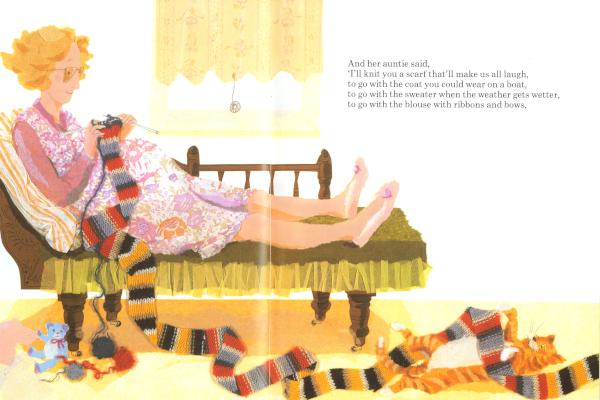