I’ve made up a tune to the verses in this book and sing the song at: http://www.youtube.com/watch?v=t3A2BBegr7U

23:07:13 I’m so excited I’m incoherent and can hardly type. Australia’s official gift to the new royal prince in England is a signed copy of Ten Little Fingers and Ten Little Toes. (As well as a $10,000 research project in his name to ’save the bilby’ at our national zoo in Sydney and a free pass, should he ever pass by.) I’m ecstatic and the phones have been hot, hot, hot. Not bad for a 67 year old. I’m so proud that Australia is sending something as simple and sensible as a book, any book, let alone one of mine. I hope the little prince loves it and lives happily ever after! (A few days later he was given the name George.) This is the signed book: 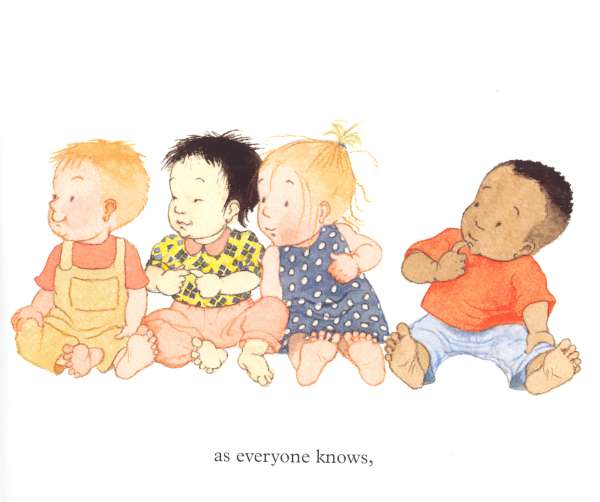 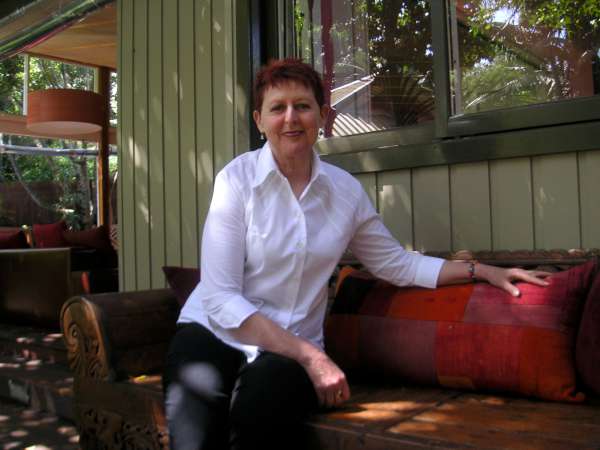 I was on holiday on Lord Howe Island when I heard the news by fax that Helen Oxenbury had agreed to illustrate Ten Little Fingers and Ten Little Toes. This is a photo of the happiest woman alive that day! 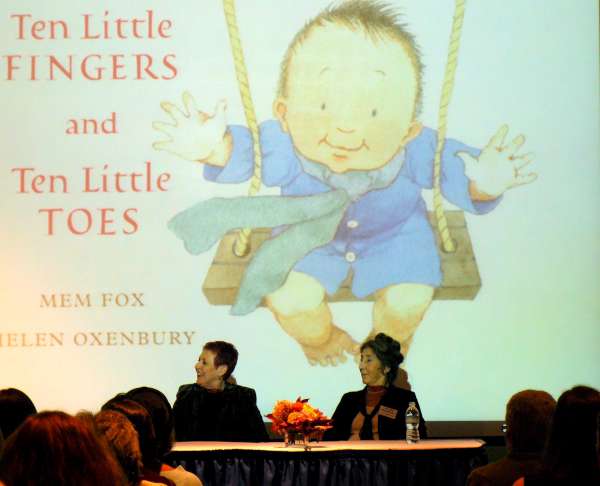 On tour in Washington DC: me with the illustrator, the divine Helen Oxenbury (and the USA cover)

And to come into the present day, ‘present’ being the operative word, there is now (Sept 2103) available at Big W stores across Australia, the cutest little chest of drawers with a baby book and a copy of Ten Little Fingers in one drawer, and in another drawer a set of little note papers and plenty of room for tiny keepsakes from the first year of a baby’s life. 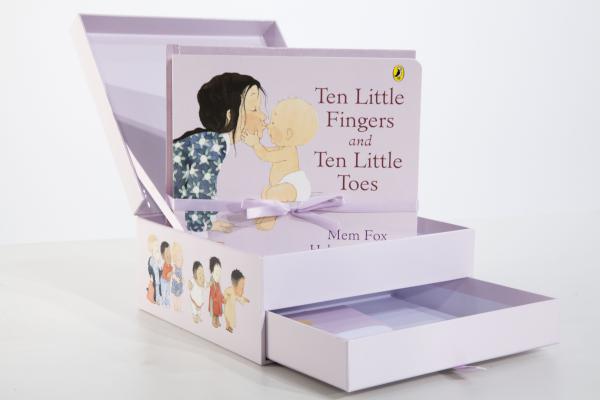 How Lots of Little Fingers Started a Story (from a speech I have given about writing the book).

If you have heard me speak or have read my website you will know how much I dislike writing. Finding the right words to put in the right places is highly focussed work, intense and difficult. I wouldn’t mind writing had I not learnt from long years of experience how deeply attracted children are to great writing, as opposed to ordinary writing. They love great writing. They want it re-read many times over. They’re uplifted by it, hypnotised, enchanted, spellbound.

Ordinary writing bores them senseless. We all know ordinary writing when we see it, especially when we try to read it to children restless with lack of interest, who look away from the book, play with the Velcro on their shoes, or scoot around the room. Ordinary writing has tiresome plots with so-what endings, characters without character, banal word choice, and themes that make children roll their eyes to the ceiling. It’s the kind of writing that you read in school readers and it comes all too easily off the pen.

It comes off my own pen all too often. A few years ago I was so dispirited about my literary career that I phoned my editor in California and my agent in Melbourne and wept. I told them I hated writing, I’d lost the talent for it, I would never write again and I’d decided to resign from writing altogether. I was in Chicago at the time. I can see the hotel room where I made the resignation calls.

My agent and the editor were calm and kind. They didn’t mock. Neither did they attempt to dissuade me from my path. They did say I could kill off The Hungry Giant, a preachy story that had been dragging me down for over two years. They told me to bury the hungry giant and never to think of exhuming him.

I relaxed. I slept and slept. And a week later, on the long plane journey home from America via Boston-London-Singapore-Sydney-and-Adelaide, I wrote two new stories for babies: one about two little monkeys, and the other about fingers and toes. I know! Resign one day, write two stories the next! I felt a little foolish, I admit.

It usually takes me over two years to write a book of 500 words, yet suddenly, miraculously, two new stories had arrived, unannounced, over 40 hours. Both stories were accepted for publication within hours of my having landed. I was a born-again writer. I can’t explain how it happened and have little hope that it will ever happen again.

One of the stories I wrote on the plane was Ten Little Fingers and Ten Little Toes, illustrated by Helen Oxenbury in her heavenly ‘baby’ style. Imagine the illustrations of babies on each page, from a different part of the world. Better still, purchase the book and see for yourself!

It begins: ‘There was one little baby who was born far away,  and another who was born on the very next day.  And both of these babies—as everyone knows—had ten little fingers and ten little toes.

There was one little baby who was born in a town,  and another who was wrapped in an eiderdown.  And both of these babies—as everyone knows—had ten little fingers and ten little toes…’

Good ideas are as rare as a fat person in a famine. And they come from hearts, not heads. Bad ideas tend to come from people’s brains. They appear frequently and buzz about like mosquitoes, refusing to disappear. My best ideas have always come from my heart, never from my brain, but they usually arrive by an indirect route.

This one arose from a workshop I ran for parents in Boston after which many of the participants had books signed. As they bent over the desk to hand me their books I played with their children and the babies they were holding who seemed to come from all four corners of the earth. Some had chubby brown fingers; some had little black faces; some had fat little pink toes and no hair at all, while others had dead straight black hair that stood all round their heads. All of them melted my heart.

I wasn’t conscious of noticing the races that they all belonged to, but the differences and similarities of the world’s one big family of children must have lodged themselves in the back of mind. I am a great advocate for world peace and understanding. If we acknowledge the sameness of humans the world over, we will not be so intolerant and so downright stupid in our international and person behaviour to others.

So, with this feeling uppermost in my mind, and remembering the fingers and toes of so many babies, I relaxed on the plane into a calm, creative state, and lo, the story was written. When the book was finally published, Allyn Johnston, my USA editor sent me this postcard: Helen Oxenbury and me on tour in the USA

In September 2009 it was on the top of Oprah’s list of best books for children aged 0-2.

Crazy news but great, and you can see it on YouTube: Ellen DeGeneres’s mother, Betty, reads Ten Little Fingers and Ten Little Toes at the annual White House Easter Egg Roll. Amazing. http://www.youtube.com/watch?v=R_CFnD-6MAQ. I don’t think President Obama was in the audience. He was probably rather busy creating a decent US health system. Three cheers for him, too!

Even better than the White House news, however, was the sensational news that the Italian edition of Ten Little Fingers and Ten Little Toes had won the award for the best book for children aged 0-3 at the Turin International Book Fair. I went to Turin (2010) to receive the award on May 17th. My sister Jan, who is married to an Italian and lives in Italy, did the translating for me. Winning the award in Turin, Italy, for the Italian edition, 2010