Here he is aged 4 in 1916, in Saddleworth, South Australia

Of all my books, Wilfrid is THE CLASSIC.   It begins like this: There was once a small boy called Wilfrid Gordon McDonald Partridge and what’s more he wasn’t very old, either. His house was next door to an old people’s home and he knew all the people who lived there…” 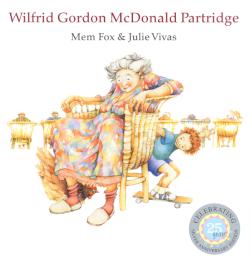 Wilfrid is the book (of mine) that adults love most, which is not to say that children don’t love it too. Its theme is memory loss. It’s one of my best selling books and is considered a classic of children’s literature in Australia and the USA. It was published in 1984 and has never been out print.

My grandfather, Wilfrid (note the spelling) Partridge, lived in an old people’s home: the Helping Hand in North Adelaide. When I visited him I noticed—and mourned—the lack of children. Old people and children get along brilliantly, yet here they were, separated from each other by the craziness of our society. So I decided to write a book that might bring children and the elderly together in the hope that teachers might initiate the inter-generational contact.

Granddad never lost his memory. He was sparky and wonderful to talk to. I visited him weekly until he died suddenly of pneumonia aged 96. That’s why Miss Nancy in the book is 96. The other old people in the book have the dignity and characteristics of the people who lived in the same home as he did. ‘Mrs. Morgan’ lived next door to him and played her organ for hours, crying from what was then called ‘melancholia’. We now call it depression. ‘Mr. Bryant’ was very tall. ‘Mr Hosking’ wasn’t an old person—he was one of my favourite colleagues at the college where we both taught. The big brother who never came back was based on my mother’s first husband who was killed in the Second World War, as was my mother-in-law’s brother, which is why they ‘never came back.’ My grandfather gave me his war medals so I included them in the sad memories. Chloë had a puppet on strings and I remember her sneezing with a mouthful of porridge so I combined those two things in the happy memories. My dad’s name is the full title: Wilfrid Gordon McDonald Partridge. Miss Nancy’s equally long name is made up from my mother Nan, my little sister Alison, and my middle sister Jan Delacourt, who was then married to a man whose last name was Cooper. My father was a missionary. He was the director of The United Teachers College in Bulawayo, Zimbabwe, for many years. When he retired, aged 66, he re-trained as a librarian. When Wilfrid was published he was ecstatic for many reasons, one of which was that he had his own ISBN number.

When I wrote this book in 1982 no one in my entire family had ever had Alzheimer’s but sadly, many years after the book was published, my father did develop dementia. He died of it, aged 89, in 2001, which makes this book particularly heartbreaking for me and for anyone else with elderly parents.

Wilfrid was made into a very moving play, which toured Australia in 1988. A later, brilliant version by Windmill Theatre Company, directed by the inimitable Cate Fowler, had several sell-out seasons around Australia in 2006 and 2007. Children laughed all the way through while adults sobbed.

Wilfrid was the first of my books to be published in the States (Kane/Miller) and has sold over a million copies in that country alone.