Thank you for loving my books enough to buy them and borrow them in such quantities! And thanks to all my publishers and illustrators, my editors and my literary agent for having guided me to where I currently find myself.

Yep, there was a flurry of excitement last week. In spite of my having been on the literary scene since Adam was a pup, as my mum used to say, people still seem to buy books with my name on them, and of course, on every book, the name of the illustrator as well. I’m trying to find a way of telling you this thrilling news without causing nausea, but it’s hard—whichever way I try to frame it, I’m bound to sound as if I’m full of myself, as if I’m the bee’s knees, as my dad used say. Anyway, here goes…

Last month (May 2018) I had three books on the Australian picture-book top ten bestseller list.  Where is the Green Sheep?, illustrated by Judy Horacek, is now fourteen years old, but even so it was no.1 on the list, an astonishing place to be after all this time. And there were two more of mine in the top ten also. And to add to it all, as if that weren’t enough, more startling news arrived from the annual borrowing-from-libraries tally. To save myself embarrassment, I’ll let the lovely Neilsen BookScan people explain it on my behalf:

Australian children’s book author Mem Fox consistently tops the earnings chart for Public Lending Rights and Educational Lending Rights in Australia—the system under which authors are renumerated for the borrowing and use of their books in libraries and schools.

This month, she is dominating the Australian picture book bestseller charts too, with perennial favourite Where is the Green Sheep? (illus by Judy Horacek) topping the monthly list, alongside a 35th anniversary edition of the classic Possum Magic (illus by Julie Vivas) in sixth place and Ten Little Fingers and Ten Little Toes (illus by Helen Oxenbury) coming in at number eight. Sheep, possums or people, Fox can’t put a (five-toed) foot wrong.

Some 2018 picture book releases that have stayed in the bestsellers chart include prolific children’s author Tony Wilson’sHickory Dickory Dash (illus by Laura Wood), and Matt Cosgrove’s Macca the Alpaca, which was published in February this year and has already generated a follow-up title, Alpacas with Maracas, which is due out next month in July.

I think I’ve mentioned many times that this year was supposed to be my year off, my year of living languorously. But like last year, in spite of my best efforts at saying no, I’ve had to turn myself into a speech-writing machine yet again. The problem is that almost every event I’m invited to is vastly different from the one before, and the one to come. The audiences are is different. The purposes are different. The theme is different. The tone is different. The length is different. I write my presentations out in full so I don’t make a fool of myself by losing my thread, or speaking for too long, or being incoherent. It takes me weeks to write a 50 minute conference speech, and often longer to write ten minute speech for a fund-raising luncheon. When one speech is printed and ready for me to stand and deliver it, another looms like a ghost in the gloom. (Talking of which, this is what we’re going through at the moment. The weather is fweeeeezing!) Anyway, the speeches… the loveliest thing about them is meeting people I’d never meet otherwise. I’m nothing if not a people person. Many photos are taken and I beg for them to be sent, but people’s lives are busy so I have none from any of the events I’ve been to since I last wrote. (It might be an idea for me to get cracking and use my own phone so I have the memories on tap, but it’s always a little too hectic and crazy to be efficient at the time.) So you’ll have to believe me when I tell you that I have been to a hysterical Welcoming the Babies ceremony for Amanda Rishworth, a brilliant federal MP in my area. It was hysterical because babies and toddlers are so funny and cute, and have no idea that an event is an event. And I was in Dalby, near Toowoomba, in Queensland for the Western Downs Regional Council, ranting on about reading to children because new parents, new librarians, and new teachers are ‘born’ every day, so the information about the benefits of reading to pre-schoolers can never stop.

Sometimes (I’m still on about the speeches) I get the timing of a speech wrong: I don’t pay attention to the emails, or I forget how many words I need for a certain amount of time. Twice in recent weeks this has happened. I was to speak at a fund-raising event in Sydney for Vision Australia, a Women of Achievement luncheon. We (four of us spoke) had to explain how we had become who we were. I thought I was to speak for 20 minutes so I wrote a speech that took 19 minutes. Then I heard it was to be only 10 minutes! Arrrgh. It took me five days to cut the talk by half. A nightmare, but worth it. I thought several women in the audience were going to have a stroke. I had taken the comic route to avoid being too serious about myself. I loved it and would have done it all over again, immediately, had I been asked.

The next presentation to loom out of the mists was for the ALEA/AATE convention in Perth next month. It’s 50 minutes. I wrote and wrote and re-wrote and was incredibly happy with what I had written, except that when I timed it, it was only 35 minutes. Arrrgh, again. It’s done now and I hope to see some of you at the conference in a few weeks’ time.

To add photographic interest to this piece I was going to post a photo of the wound in my leg—last week I walked into the corner of the open oven door (floor level)— or one of the blood all over the floor, or one of the doctor weaving my skin back together again, but I thought you might faint away.

So here’s our state logo instead, because summer is so glorious and so long in South Australia, why would I live anywhere else? Although, good grief, we still have two months and three weeks of winter to come! How does anyone live through those northern hemisphere winters? 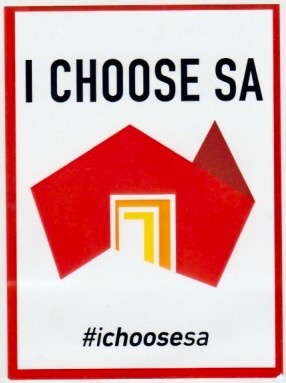 Till next time, lots of love and laughter,