Hello, and welcome back after your absence and mine! Happy, wonderful first day of spring to those of us in the southern hemisphere.

As you know, if you’ve kept up with the intermittent mutterings on my website, I’m in the unusual and happy position of having two new books published in consecutive months. It’s never happened before and will never happen again. 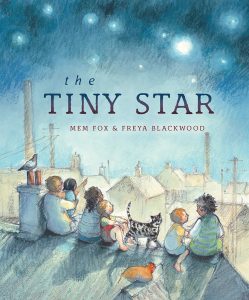 On October 1st in Australia, The Tiny Star bursts on to the scene. And on November 5th (‘remember, remember, the fifth of November…’) in both Australia and the USA, Roly Poly makes his first appearance. My one anxiety is that someone might say to someone else, ‘Have you seen Mem Fox’s latest book?’ My hope is that some know-all will say, ‘Which new book? There are two, you know. And The Tiny Star’s already received a five star review.’ (This is true, from the great Margaret Hamilton no less, in Bookseller and Publisher.)

Below is the soon-to-be famous Roly Poly. There’s a lot of excitement about Roly Poly, due to the fact that Jane Dyer and I haven’t published a book together since 1993. That book was Time for Bed, which stayed on the New York Times bestseller lists for over a year and is thriving still. Have a look at the list below this picture of the ten favourite bedtime books in England this year. No wonder the publisher, Beach Lane Books, is so excited, especially my editor Allyn Johnston, let alone Jane and me. (And yes, that is the correct grammar.) 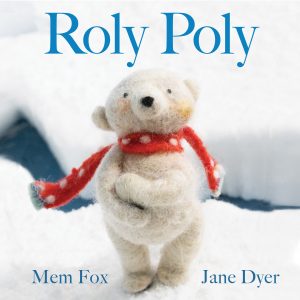 Enough about Time for Bed. The stories behind both new books: The Tiny Star and Roly Poly, can be found on this website, along with all the other stories behind the stories.  In spite of assuming that no ones reads websites any more, I give myself a great deal of  homework trying to keep the information on this site up-to-date and vaguely interesting. Needs must. Who likes homework? Not I! Did I ever like homework? Only when it was a writing task for my high school English teacher, Joh Smith, who taught me when to use me or I, among many other essential bits of grammar. She was fierce about it. Had it not been for her superb teaching I doubt I’d be sitting here, tap-tapping away as an author. I’m still fanatical about  connecting paragraphs in case I hear Miss Smith tut-tutting from heaven.

Talking of which, I had a heavenly time at the SCBWI in Los Angeles in early August. I’d been a little nervous of going to the US again after what had happened at immigration last time, but everything was fine, and absolutely everyone was warmly welcoming. I met many old friends in the publishing world, including Ally Johnston, my sublime editor, and of course Lin Oliver, below, who founded SCBWI in 1971 and is still its executive director. This is Lin Oliver and me at SCBWI in LA: not spring chickens any more, but still springing, nevertheless! 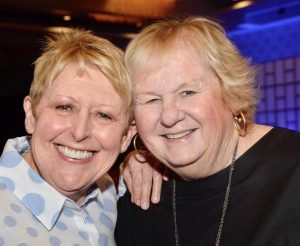 Lin is a powerhouse, whose organisation has aided many a hopeful writer and illustrator into the heady word of being published. Hurrah! She interviewed me in an In Conversation at the conference luncheon and cleverly elicited from me many things I’d never said before about my writing. We received a standing ovation, which is always lovely. Need I say more? I received another standing ovation for my hour-long presentation on rhythm in children’s picture books. I was, by that time, about to become full of myself. It was hard not to, given the way Americans so openly worship anyone they admire. Along the endless corridors of the convention centre and on the long escalators, I was accosted again and again by excited admirers who were over-the-top in their mighty praise of my work. A few even wept to find themselves talking to me. I know: unbelievable to any Australian. I had to accept the well-meant approbation with all the charm and grace I could muster, but as an Aussie it was madly necessary to get back home to reality as fast as possible, to clean the kitchen and go to fitness, and to  the supermarket, and pick up my grandson from school, and attend to all the other daily duties that keep my Down Under feet firmly on the ground.

The greatest excitement for me at SCBWI occurred in my three hour workshop on the rhythm of language. I used to teach full time, as you know, both in schools and at a university, and I found it a profound and immensely thrilling way to live my life. To find myself once again ‘in the classroom’ with 50 students for three hours was the wildest ride. But best of all, I realised in the final 20 minutes of the session that my students had actually learnt what I’d hoped to teach them. I  felt like soaring, and yelling, and leaping to the ceiling, I was so happy.  I was a teacher again.  With results! Bliss. (More from me-as-an-author, very soon, with the book tour itinerary for The Tiny Star. The teaching is over, sadly.)

Other news from the educating world: Grandparents’ Days and Book Week parades are big occasions in the school year. Below is a divine photo of Grandparents’ Day in an Australian school in Victoria, the name of which school I have sadly mislaid. If it’s you, please let me know so I can rectify the situation. These divine little Australians are all saying, ‘Hey! I’m Australian Too!’ Back to my state of South Australia, which was the first state to instigate a Premier’s Reading Challenge. I was the first of its many subsequent and continuing reading ambassadors. The aim of the PRC is to have children reading twelve books a year for pure pleasure and to be extra-rewarded for doing so with increasingly prestigious medals over the years, right up to Reading Legend. This year the premier thanked us all for our voluntary involvement with an afternoon tea at Old Parliament House. Here’s a photo of the premier and me. And another beneath it. These are the South Australian authors who are also PRC ambassadors. The tall  woman on the right is an ex-student of mine, Katrina Germain, of whom I’m inordinately proud. There are also sportspeople who are reading ambassadors, which is fantastic. They were there too, in their own photo.

This isn’t one of them: it’s Louis, the first grandchild of my wonderful florist, Toni. He just wanted to show off  his impeccable taste in books. Clever lad. I can’t fault him.

There’s no time to mention my own grandson, or the weather, or the garden, or any other topic you might find tedious. What luck, you say!