Hello, and yes, I am still here, contrary to all indications!

A new addition this time is my reading of THIS AND THAT, which you can listen to via the button below.

Anyway, I hope this finds you well, as they say in the corporate world. I’m ‘dowen fan’, as child in the southern USA once wrote to me. But here’s one of my favourite letters of more recent times from a talented girl called Kaya. Her likeness of me is amazingly accurate. From Kaya. My favourite kind of letter, of course. Thank you!

Does anyone read websites any more? In these days of Twitter, Instagram and FaceBook, a website seems a strange and outdated anachronism. So why do it? This particular website is updated only occasionally (you hadn’t noticed??) by a frantically busy writer, not to mention wife-mother-grandmother-housewife-reader-gardener-fitness freak-friend-neighbour-de-clutterer-and-letter-writer. It’s intended mainly to be a useful repository of information about me and my books; about how to write picture books; and how to teach reading and writing. The ‘latest’ news angle is always going to be somewhat stale, and probably as irrelevant as most Instagram posts are—instantly, (ooh, cheeky!) unless a new book is out or on the horizon.Which is why I’m writing this time.

There are TWO NEW BOOKS on the horizon, and I’m wildly keen on both of them, although each is very different from the other. The first is DUCKS AWAY!, illustrated by the fabulous Judy Horacek again, published by Scholastic Australia, and eventually also by Scholastic USA. It’s a typical Mem Fox story book for very young children, with lots of simple rhyme, rhythm and repetition. And it’s a boon for parents—it  takes less than four minutes to read! Hah. It’s also the kind of classic Mem Fox/Judy Horacek book that makes learning to read an easy delight. I adore this book. You’d think I’d adore all my books, but I don’t. This one, in my biased, thrilled opinion, is an A-list book. I’ve just received my first copy and I can’t wait for it to be in the shops at the end of October (2016). 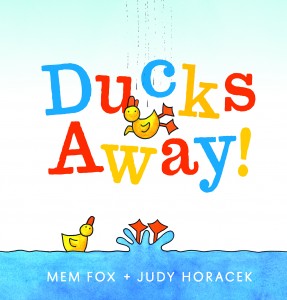 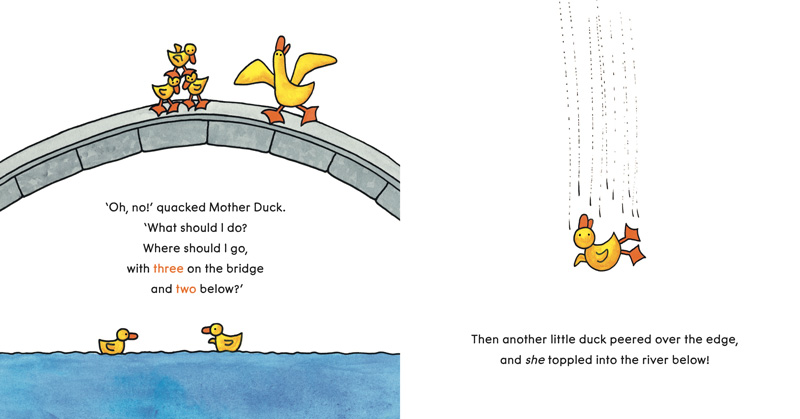 The second new book (and I think I can reveal the title since it’s now gone to the printers) is I’M AUSTRALIAN TOO.  I’m ill with excitement about it—even more than I was 33 years ago about the publication of my first book, Possum Magic. I know. Huge. The exquisite illustrations are by Ronojoy Ghosh, and it will be published by Scholastic Australia on March 1st next year (2017) four days before I turn 71. Still kicking along in my old age, although everyone says 70 is the new 50, so no one is impressed. The book is for children aged 6-96. Enough said. I don’t want to reveal another thing. Except to say that last week, when Ronojoy’s wife read the book, she wept. She and Ronojoy are recent Australian citizens.

Children’s Book Week appears increasingly to be Green Sheep Week. Although WHERE IS THE GREEN SHEEP? is now well over twelve years old, the number of emails with photos of green sheep of various kinds that I received during Book Week last month (August 2016) makes me realise its popularity is growing exponentially. It eclipsed POSSUM MAGIC as my best selling book in 2015-2016. Good grief! Anyway, here are three of the Book Week photos of green sheep and one of a magic hat on the wizard from THE MAGIC HAT. 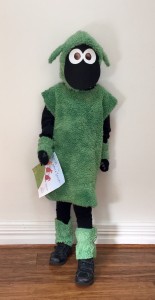 Nate Nesbitt, looking sensational as the green sheep. He painted the shirt all by himself. 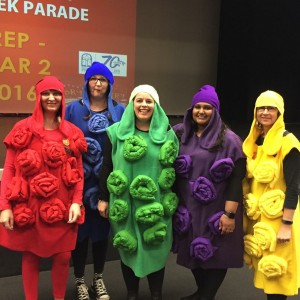 ‘Just had to write and share with you the delight we had finishing off our first ever week long book week festival at Hillcrest Christian College. The Discovery Centre team dressed up as sheep and retold “Where is the green sheep?” Big thanks to Mem and her passion for literacy.
Happy Book Week! Michelle Nye’ 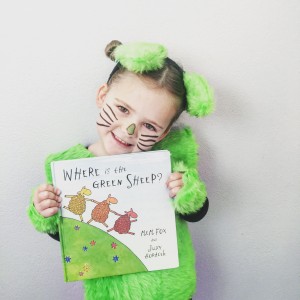 ‘My son went to Book Week today in Moree, NSW., dressed as the Wizard from your “Magic Hat” . A book I have lost count of reading. He was picked as the best dressed boy in his year 1. He had a great time! Marguerite McCormick’

I always mean to keep a list of the places I have spoken at, and the great people I have met, but as usual it’s taken me so long to update this ‘latest news’ that the list has disappeared. Suffice to say that whenever I’m out and about my aim is primarily to talk to parents, and to have the biggest laugh possible, about the delight of reading to babies, toddlers and pre-school children, and to rant about how much benefit it is for children’s reading skills when they hit school, if they’ve been read to endlessly in their first five years of life.

Occasionally I weaken and actually go to schools (yes!), although I keep saying I don’t go to schools anymore because I’m too busy, too tired, and too old. Obviously my grandson’s school is convenient.  I’m there four times a week, either dropping off or picking up, so I do read to some of the younger classes and of course I always find I love doing it, old & tired though I may be. And sometimes my heart goes out to a particular local school that is either disadvantaged, or filled with a multicultural mix of children, or it’s a ‘special learners’ class, or a passionate teacher whose letter I cannot resist, although I try hard to because I am honestly old, incredibly busy, and usually tired. Also, on occasions, a favourite college student from days gone by, who is now a principal or key teacher, will emerge from the past by accident—how can I say no to her or him? I can’t. The rewards, in the end, are mine. This letter was from a local school, William Light, a multicultural school not far from me: 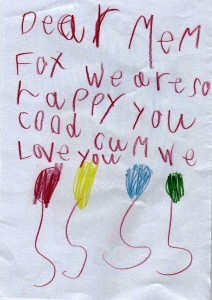 I may not recall every event in every detail but I won’t be able to forget the East Devonport Child and Family Centre in Devonport, Tasmania. I was invited by the centre leader, Jenny Mountney, to speak to the parents and workers at the centre about reading to pre-school children: the why, the how, the what, the when, and how often. Devonport has a population of only 26,000 but the evening event for the general public was sold out, with over 450 attending. This was in June, in the dead of a Tasmanian winter.  (Having said that, it was even colder in Adelaide, the most freezing winter I can remember, and still on-going, well into September and spring.)

For some reason, my Devonport visit triggered a whole lot of changes, enthusiasms, excitement and flow on. Library borrowing increased by a third. A woman who can’t read at all asked a neighbour to come in and read to her child regularly, so the child wouldn’t suffer the same ghastly disadvantage that her mother had experienced. And so on. The results, many and varied, of that visit have meant that I’m going back not once, but twice. I never go back! There are so many places that need to hear the read-to-your-kids message that I usually go-speak-leave, and then go somewhere else the next time. I’ll be back there on Oct 31st/Nov 1st; and then again on March 11th 2017. Contact the East Devonport Child and Family Centre for details.

And just in case you’re reading this before Oct 21st, I will be reading to babies at a Welcoming the Babies event at the Cove Civic Centre in Hallet Cove, a suburb in Adelaide, South Australia. The event will be at 10:30-11:30. It is being organised by the local federal MP (Labor) Amanda Rishworth, which is a very worthy thing for a politician to do. For details contact: <[email protected]>

I will also be reading to babies at the Adelaide Women’s and Children’s Hospital this coming Sunday 25th, which is after I’ll have posted this message. I’m only mentioning it because I’m so pleased that the hospital is keen to alert parents to the joys and benefits of reading aloud to their babies and other children. The earlier the message gets to parents, the earlier their babies will be read to. Success and happiness at school begin in the first months of a child’s life, not in the first year at school. There’s a new batch of parents every single day so the message has to be a broken record of endless repetition. And I’m happy to be the person who repeats it. (If you lack confidence in your ability to read with expression and vitality, don’t forget that there’s a reading aloud lesson on the website.)

Finally, on Q&A (a famous weekly tv program in Australia) this week: Sept 19th 2016, a colourful, well-known, independent federal politician, Jacqui Lambie, gave POSSUM MAGIC another moment of glory. I won’t go into the distressing details of a government appearing to want to kill the Australian publishing industry, but it was in that context that Jacqui made her stand, and in so doing probably did our fighting cause more good than all the earnest, fiery letters and submissions that every Australian author and publisher has written on this subject over the last year. Thank you, thank you, Jacqui Lambie! Here’s the clip, from The Huffington Post: <http://www.huffingtonpost.com.au/2016/09/19/qanda-jacqui-lambie-slams-proposed-copyright-changes/?utm_hp_ref=au-homepage&ncid=tweetlnkauhpmg00000001>

Until next time , which will be very soon, all the best, and loads of love and laughter!