If anyone reading this has met me this year, at any time, at any function, and if you can recall that I was in perfect health at the time, please let me know. I feel as if I’ve had viruses and chest infections and severe asthma without ceasing since about March. It’s dismaying, needless to say. I work anyway, no matter what, which is probably not sensible. Moan, moan, moan! And that’s enough of the whining and the complaints. I’m so fortunate in other areas of my life that I probably need illness to balance things out. 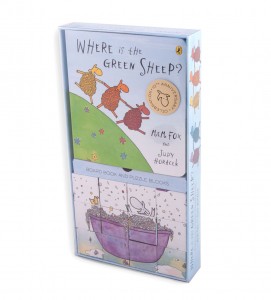 Christmas is a comin’, as we all know. If you need a gorgeous prez for a 2-5 year old, may I recommend, without any modesty whatsoever, the box set of WHERE IS THE GREEN SHEEP? with an accompanying set of puzzle blocks. It’s divine. I wish I were four myself, so it could be under my own Christmas tree. 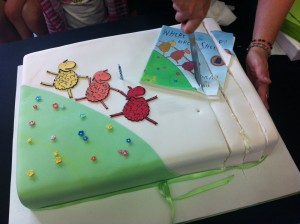 WHERE IS THE GREEN SHEEP? is ten years old this year and a big party was held on November 16th at the National Library in Canberra. As I said at the time: ‘10 years of the Green Sheep, 31 years of Possum Magic…it will soon be a hundred years of Mem Fox!’ (I feel a hundred years old, some days.) Judy Horacek, the hilarious illustrator of Green Sheep, did some drawings of the sheep in the book and asked the children to guess which they were. She had hardly put her pen to the page, as it were, before hands flew up and voices called out in excited recognition. It’s huge, that book, yet when it first came out I was in a bookshop one day and happened to see a woman pick it up, flick through it and put it back down, dismissively. My heart sank. I thought it would die a sudden death. It must have been the children themselves who passed the message along to the grown-ups that this was a book they had taken into their hearts and had to have. Here’s a picture of the amazing cake: 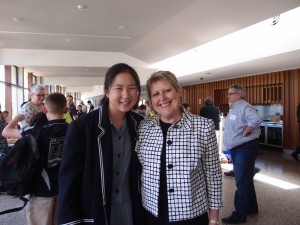 My second last event of the year (apart from reading books at my grandson’s kindergarten, during which he blushed from this neck to the tips of his ears, poor child, because I was showing off in the teacher’s chair) was the award ceremony for the South Australian Premier’s Reading Challenge on November 21st. I’m an ambassador for this program and a most enthusiastic advocate for it. Most schools in South Australia enter the challenge, which is for every child to read twelve books for pleasure within the year. Medals of increasing importance and prestige are awarded, as they would be for sporting prowess during the year. Obviously, good readers might read twelve books a week, or a month, but for children who haven’t realised how fabulous reading is as a leisure time activity it is a challenge, and also, I hope, a great pleasure to be able to read in peace and not be asked any questions afterwards. The challenge has been going for eleven years now so the students who started in Year Two are now leaving school and about to go to university. Here’s one of them—I was so proud to meet her: Shanna Lee from St Dominic’s Priory College in Adelaide.

If you’re looking for gifts for adults who love reading, may I recommend the following four books I’ve read and loved since my last blog in October:

Till next time, all happiness to you!